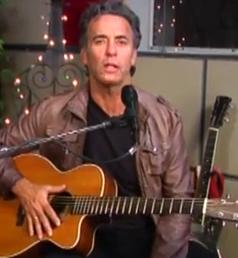 Hey. I’m Jimmy Dillon and welcome to the Acoustic Café.
We’re going to be talking about songwriting and acoustic
guitar and how they relate to each other.

Before we get started I wanted to tell you a little bit
about where I come from, musically and where I was born
and what my influences were. I was born in Los Angeles,
California in the ‘50s, what I consider the golden age
of rock and roll. So it was getting into my bones at a
very young age.

I remember picking-up an Elvis record and, you know,
dancing around the house and pretending I was playing
guitar like this. Of course I was about six years old,
seven years old, at the time.

And then what happened was, you know, I was raised on radio,
so being raised on radio in the ‘50s was such a cool time to
come up because it was the first time we’d all heard music
like this, you know, it was called rock and roll. Up until
then it had been mostly stuff like Sinatra and Big Band stuff,
and then into the early rock and roll like Little Richard
and Elvis and Gene Vincent and all that good stuff.

But by the time I came of age and I realized I wanted to
play guitar, it was time to – it was the ‘60s. So I’m really
a child of the ‘60s in terms of my formative years on
playing guitar.

So that little intro I did for you, I was doing a little
kind of a little Bob Dylan. You can’t really mention the
‘60s and you can’t really mention songwriting and acoustic
guitars specifically, without mentioning the giants that
were all over the place, on the radio and influencing us
all in social ways and other ways.

I think this particular instrument is the consummate instrument
for the last really 50, 60, more, 100 years, and there’s a reason
for that. I was talking to one of the guys here at the studio
and, you know, guitar, especially acoustic guitar you can take
it with you; it goes up against your body; you play it; you
feel it, the vibration of the strings, and it’s a great writing
tool. You can write anywhere you are. It’s a mobile instrument;
it travels with you. That’s really cool.

I wanted to tell you a little bit about my influences growing up.
By the time I was playing acoustic guitar I was living in Michigan
near Chicago, so I had some blues influence. I was hearing guys
from Chicago like Howlin Wolf and Muddy Waters and of course the
electric stuff as well. But primarily we’re talking about acoustic
stuff here. So, John Lee Hooker, who I was fortunate enough to do
a duet with, an acoustic duet, that was my early influence as well
as simultaneously the Beatles, the Stones, Traffic, Stevie Windwood,
all the great British acoustic rock guys.