How To Play Guitar With Feeling | Blues Scales

Playing the blues is no easy feat. It’s such a popular genre to play though, and many musicians, guitarists especially, would benefit from learning to play the blues. In fact, you probably already listen to some tunes that have been directly influenced by this genre, without even knowing the basic elements of it. Well, say goodbye to that feeling! Below you’ll find some basic blues guitar lessons to introduce you to the world of blues.

Blues Guitar Scales
The first blues guitar lesson you should learn is a basic blues scale. For this example, we are going to use a common one: a minor pentatonic. We’re including the chart for that so you can follow along. 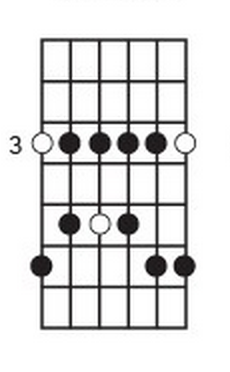 What you might think is that the scale is a lot simpler and shorter than other scales you may have seen, but that’s okay. For your first lesson, you should memorize this pattern and how it sounds, and practice playing it up and down, and even in other positions. After you are more comfortable with it, try soloing on it and adding different rhythms. After that, it’s time to learn the true power behind the blues…

Bend With Love
There’s a reason the blues have captured the hearts of so many people. It’s because it’s a genre that must be played with feeling, soul, and love. You can’t just play it nonchalantly; you have to get into the music, and put your heart into it. And a great way to do that is through your bends. If there’s one blues guitar lesson you should learn, it’s to do your bends with love. Bend like you’ve never bent before! Make your bends, and every note, sound like they’re crying or wailing. That’s where the feeling comes out, and that’s how you get others to feel your music.

Check out this video lesson on BENDING & VIBRATO TECHNIQUE

Study Great Players
There are so many amazing blues guitarists out there, and many of them love helping others by posting tutorials and videos around for you to watch and learn from for free! Besides instructors though, you can also learn from professional performing blues guitarists as well, as there are a ton of concert videos online too. Some of the greatest blues guitarists are B.B. King, Stevie Ray Vaughan, Buddy Guy, and Jimi Hendrix, and there are so many others. If you really want to learn blues guitar, you can find lessons in just watching these amazing players on stage, and listening to their music.

These are the basics to help get you started learning to play the blues, but don’t stop here. There are plenty of resources out there for you to learn from, so take the blues guitar lessons you learned here and go out and apply them!

If you like blues guitar, I recommend you to check out some of our: