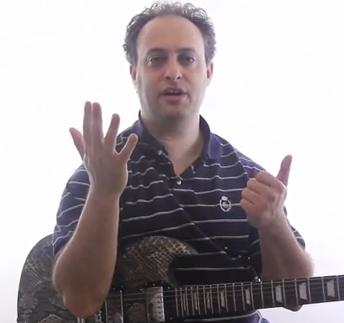 Hey, it’s Claude Johnson from guitarcontrol.com. How’s it going? Today I want to give you an easy guitar lesson for beginners and listen, it’s all about playing your favorite songs, right? The thing with guitar is, it’s really not that complicated. What you’re going to find is that once you learn the basic chords you’re going to be able to play so many songs. When you get started, and I know it can be intimidating with, oh, I’ve got to learn all this stuff, but really it’s not that hard. I did a previous video on the seven basic chords. I’m going to just keep coming back to that because you really can do so much and again, those chords are E minor, G, C, D, A, A minor and E minor. Let me give you a couple examples of songs with just two chords or at least part of the song. Check out this one. A little bit high-up for me to sing, but you can also sing it down an octave. Obviously, by the way, that’s Jane’s Addiction, “Jane Says”. If that’s too high for you to sing, you can sing it down. But even before you start trying to play and sing together you just need to be able to do this. That’s G to A. Notice that I’m doing a specific strum pattern. First thing, obviously you need to know those basic chords. You need to know your G, you need to know your A and you need to be able to switch between them fast enough. Once you have that down — don’t get caught-up in trying to count. Like, is that a quarter note, an eighth note? Just kind of mimic. I’ll show you the strum pattern. You can mimic that. I’ll slow it down for you. Notice at the end, a little percussive rake in there. Again, it’s not about getting it perfect, just mimic it. My main point is that you can be playing something as simple as just two chords and you’ve almost got a song right there. By the way, those chords, G and A, those are two of the seven basics. Here’s another example. That’s Nirvana, “About a Girl” and it’s E minor to G. Again, same thing, it’s just learn E minor, learn the G, learn to switch between them and then try to mimic the rhythm here. Let me slow that down. So what’s my point of all this stuff? Number one, you can play something as simple as two chords and you’re playing music. Number two, again, focus on those basic seven chords, which I show you in detail on another video. And number three, the whole thing is just not complicated. Just learn a couple basic chords and be able to play them well and the whole thing is just going to open up to you. That said, if you’d like to learn more about my methodology, I call this the one-two-three method. Number one, learn the chords; number two, learn to put them together into chord progressions; and number three, play the complete songs. I go into a lot of detail on this process and give you 75 in-depth examples, the exact way to play 75 of your favorite songs. You can check that course out at guitarcontrol.com/beginner. I hope this was enlightening for you and thanks for watching Easy Guitar Lesson Made for Beginners and Take care.

How To Play Blown Away By Carrie Underwood

How To Play Night Moves By Bob Seger

How to Write a Song on the Spot

How to Play Heart of Gold by Neil Young

Check out this free Three Easy Killer Van Halen Riffs from Guitar Control instructor Darrin Goodman. Be sure to click the link for the free