How to Play Blues Guitar Solo With Fast Fingerpicking Licks 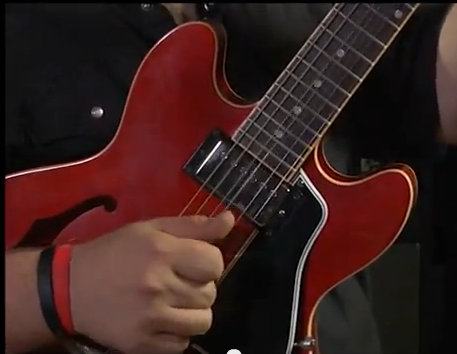 It’s a clever way to supercharge your blues lead
guitar playing without spending years working
on your picking chops.

You might already know about it, but Boogie
definitely adds his knowledge to the mix here…

Stay tuned because on Feb 6 (that’s only one and half weeks!)
we release: BOOGIE BLUES MAGIC!

It’s a 3 DVD set complete with tabs… and
it will give you an awesome selection of
killer blues lessons and secrets,
straight from Jonathon Boogie Long,
winner of Guitar Center’s 2011
King of the Blues contest.

It comes out at

And you’ll want to order as fast as possible
so you can win those early bird prizes.

So I use my fingers a lot in my playing, particularly.
I’ll hold the pick like this, but the I’ll wrap it —
I’ll be in the middle of playing and then I’ll pull my
hand away and I’ll tuck the pick right here under my
index finger and I hold it like this here. So you have
it here and then you wrap it up here. Just kind of let
it go and fold it in as you let it go. So you’ll be playing…
and just fold it up. Let it go and fold it up. Sometimes
you have to use your thumb and kind of push it over to get
it out of the way, but then it frees-up all your fingers
to get the… You get the essence of the picking notes,
because anybody can just play licks like — you can play…
But I can take that same lick and get more out of it with
the popping of the notes.

Just like picking under the string, getting up under the
string with your right hand and just pulling it out like
this. And then doing the same kind of thing with your
thumb, kind of pulling the string out and getting the
pop with it. So you get like… But there again, it’s
all about hand/string.

Let’s take a simple blues lick like… Right? So not
really a simple blues lick, but not too complicated of
a blues lick. And then you can chicken pick it. You
kind of do the — getting under the string and pulling
it out and playing it a little faster and get this kind
of… I like to do like the… Which is just 7th G string,
bend up, 5th fret B string, and then you bring the 7th fret
G string back down, 5th fret G string, and then 7th fret D
string, 5th fret G string. And that just demonstrates like a
rhythm, because it’s all about rhythms in your fingers. It’s
just all about playing with it and really sitting down and
working with it.