Some Of The Best Blues Guitars 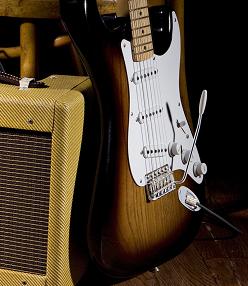 Over the years, blues guitar players have used a lot of different guitars to get that blues sound, but which electric guitar is the quintessential best blues guitar?

Fender Stratocaster
Fender’s Stratocaster, or “Strat” for short, has been a staple of blues music since the ‘60s. Although it’s used for virtually any genre of music, the Strat’s three single coil pickups that traditionally come on a standard Strat have a distinctive bluesy sound.

Several great blues guitar players are known for their Strats. Match your Strat with an Ibanez Tubescreamer and you’ll have yourself an authentic blues rig.

Blues players Buddy Guy, Eric Clapton, Stevie Ray Vaughan and John Mayer have their own signature models of the classic guitar. Each model features the artist’s small variations, but the heart of the guitar is the same as a standard Strat.

Clapton once called the Stratocaster “as good as it gets,” which is more than enough to convince me.

Fender Telecaster
Fender’s Telecaster, or “Tele” for short, is an older model than the Stratocaster, and it’s mostly seen today in country music. A standard Tele comes equipped with two single coil pickups—one at the neck and another at the bridge. The bridge pickup is known for its twangy sound, making it perfect for country and blues together, but the Tele is a very versatile guitar as well.

If you’re looking for a great guitar, the Telecaster may not be quite as versatile as its Stratocaster brother, but it will get the job done. Jeff Buckley, Bob Dylan, Vince Gill, Brad Paisley, Merle Haggard, Muddy Waters, Keith Richards and Jimmy Page are known for using a Telecaster.

Gibson Les Paul
If you’re not the Fenders don’t appeal to you, take a look at the Gibson Les Paul. Like the Strat and Tele, the Les Paul is a solid-body guitar, but unlike the Fenders, it comes equipped with two humbucking pickups, giving it a lot of versatility.

Many guitar players steer clear of the Les Paul because it is such a heavy guitar, but it is an absolute powerhouse for blues music. Before Eric Clapton started using Stratocasters regularly, he played a Les Paul. Gary Moore, Joe Perry, Pete Townshend, and Jimmy Page are also well known for choosing the Les Paul for their blues-inspired rock.

Gibson ES-355
Though I’m leaving a number of guitars off this list, I can’t forget about the Gibson ES-335. This is the guitar that B. B. King played. It’s unique from the other guitars on our list because it isn’t a solid-body construction; it has a semi-hollow body, giving each note a longer sustain.

B. B. King’s famous Lucille is probably the most instantly recognizable version of this guitar. He played an ES-335 until his death in 2015. Jazz musicians also frequently use the ES-335.

While no guitar can be called the best blues guitar, these Fender and Gibson models are by far some of the most popular guitars of blues musicians.