3 Of The Most Important Techniques in Playing Blues Guitar

Hello, jazzers! Joshua Olivieri here with some basics on playing the blues guitar. As some of you already know, I have a great fondness for the blues and everything related to it. It is a measure of a guitarist’s skill as well as blank canvas for expressing any kind of emotion while still having an air of confidence and unparalleled swagger.

The way a guitarist plays their blues is an echo of how good of a musician they really are. If you hear one that seamlessly dances his way around a 12 bar progression and understands his notes shows that not only do they understand the blues, but they understand a lot of how music works as well.

Check out this cool lesson on 12 BAR BLUES RIFF

It’s those ways of playing guitar that everyone (myself included) aspire to. So with that, I’m here today to help you advance your skill in playing the blues with a few basic styles and tricks to help you perform and understand it.

This is an example of contrary motion, a technique often used in the blues. It works exactly how it sounds: one set of notes increases in pitch, while the other decreases simultaneously. This is usually performed on guitar by playing two strings at once, playing the frets accordingly.

Another simple, yet effective technique is called vibrato. It’s probably the easiest trick to do; you just shake the string your playing. Despite its simplicity, it is one of the most expressive tools
you will ever have in your blues arsenal. Play them frequent and play them often. They can fit pretty much anywhere, especially if you’re soloing. 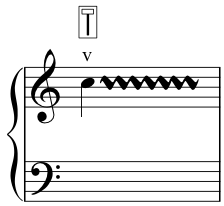 This last technique is probably the most important in blues guitar. The hammer on and pull off. Hammering on is simply where you pluck a string, and then sound the next note by placing your finger on the fretboard hard enough. The pull off is the exact opposite: you pull off of a string hard enough that it creates the proper sound. In nearly all blues music, these come in a quick and unrelenting fashion. Spend a lot of time on these, because you will play them very often.

I also want to recommend you this great course in DVD: