How to Learn Blues Licks and Blues Soloing 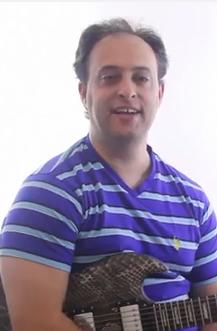 How to Learn Blues Licks and Blues Soloing

Hey, guys. Claude Johnson here from guitarcontrol.wpmudev.host.
I’m really excited to be with you today and talk about
playing blues licks.

So how do you get started with that stuff? Well, it’s
pretty easy, actually. Number one you want to learn
your pentatonic scale and you can start just mixing-up
those notes. Now the scale comes in different positions
across the neck. I go into all these positions in some
other videos so I’m not going to repeat myself with that.
I’m just going to remind you to learn pentatonic scale
because all the blues licks have that scale as the foundation.

You also want to learn the bending technique. What I mean
by that is bending your strings and then also shaking the
notes, which is called vibrato. You can do vibrato bent
like I just did or just shaking the note. Also, when you’re
just getting started in the beginning, it can be helpful
to study some solos or some parts of guitar solos by the
greats, the legends of blues. For example, I’ll give you
two great examples. Eric Clapton’s song, “Cocaine”, which
actually, it’s a J.J. Cale song, but he kind of made it
famous, right?

We’re in the key of E but we’re down to this position.
I’m going here from my 12th fret, up to the 9th fret
of the G string. So 12th fret of the D. Check the tabs.
Actually, click in the link in the video description and
you can get all these notes written out for you. Notice
I’m doing this little quarter note bend. See how I’m just
kind of tugging at it? That’s another big key to blues
licks. It doesn’t have to be this position.
If I’m up here, notice how…

Here’s another example. Stevie Ray Vaughan, probably
one of the greatest blues guitarists ever. No question
about that. This is the start of the “Crossfire” solo.
Really he’s playing it in E but he’s tuned down half a
step so kind of in the key of E flat here. I’m going to
bend up. I’m on the 13th fret. So you can bend up and
hit that high E string, 11th fret and then back down.
Again, check the tabs because it will take me probably
10 to 15 minutes to explain this whole lick, like all
the little subtleties. But check out the tabs for that.

Basically what I’m doing, I’m in this basic pentatonic
shape on E flat. So we’re bending up. A lot of these
blues licks will come from that root position. Then
we’re sliding up. Notice the vibrato. And then more
bends. Vibrato again. So you really want to work on
those couple of things: pentatonics, bends, vibrato
and then looking at and studying solos of the masters.

I hope this was helpful. Check out my other videos.
I do a series on Ridiculously Simple Lead Guitar for
Beginners. Check that out. And if you really want to
learn fast, then get my DVDs because I just go boom,
boom, boom; give you everything in one system.
Check out the beginner lead guitar course,
guitarcontrol.wpmudev.host/lead. So that’s about it.
All right, talk to you soon.