Blues guitarist Johnny Copeland (Mar 27, 1937 – Jul 3, 1997) was an American blues singer and guitarist from Haynesville, Louisiana. As a teenager influenced by T-Bone Walker, he formed the Dukes of Rhythm in Houston Texas, signing with Duke Records in 1957. In his early years he played with such acts as Sonny Boy Williamson, Big Mama Thornton, and Freddie King, but his early records met with little commercial success. Copeland moved to New York in 1979 where he was signed by Rounder Records and released highly acclaimed albums including Copeland Special and Bringin’ It All Back Home. As a blues guitarist, he won a Grammy in 1987 for best traditional blues album with the Showdown album. 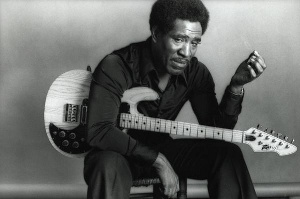 Copeland Special
Bringin’ It All Back Home
Showdown