Acoustic Blues Lesson – How to Make Your Guitar Playing Interesting
Now that’s a whole different ball of wax there. That gives you
kind of a — I say it’s a little more spicy, I think.
This is more sweet and high.

One other thing I want to mention is when you go to your
IV chord there’s lots of ways you can land on that — sorry,
the V chord — I-IV-V. There are a couple of ways you can
land on that, many different ways. One way I like to do it
is the way we just did it, which is… It kind of finalizes
it, right? You feel the tension there, the V chord.
It sends you back to your I.

Another way rhythmically is… Now I’m getting into some
big city blues. So what I tend to do is if I’m starting
out a blues and I’m just going like… Singing some blues.
I’m a good man, feeling bad. I’m playing along and this
first verse, there’s kind of not a lot going on musically,
kind of letting the song just groove. I’m getting through
my first verse and then I’m down to my IV chord. I might
want to build-up for the second verse. Here’s how I would
do that. Maybe I’d go to a solo here. Down to a whisper.
Drama. Space. Very important in the blues.

If any of you guys have seen B.B. King or any of those
great blues guys, I’ve noticed they’re the masters of,
from a roar to a whisper and I talk about this in many
of my course, including the electric ones, but especially
in acoustic. It’s just you and your guitar. You’ve got to
create — you’ve got to make it spikey. You’ve got to create
some space; you’ve got to create some dynamics. So I think
dynamics are really, really important, especially when you’re
playing acoustic blues. Because if you’re just playing the same
thing, kind of the same volume, same style, same amount of notes,
same — it just kind of goes nowhere. And that’s not what the
blues is about. The blues is about emotions, about feeling.
It’s about being authentic with your playing and digging-in
and meaning it. If I’m going to believe what you’re singing,
there’s got to be some rise and fall to it. So I think that’s
the drama of the blues. That’s the drama of music, essentially,
in my mind.

So that basically concludes this lesson. And I’m now going
to go deeper into this stuff and go into more chordal stuff,
because I want you guys to be able to do more than just…
That’s cool. Or even this. But I’d like to get into more,
you know, what makes the blues, I think, interesting is when
you get into the stuff like this. Because as a one-man band,
which essentially we are when we’re playing acoustic guitar
alone, you want to have some flavor or some color going.
Then you want to go to some alternate chords, too.
That kind of stuff.

So we’re going to get into that in the next chapter and we’re
going to also explore all the different kinds of blues. 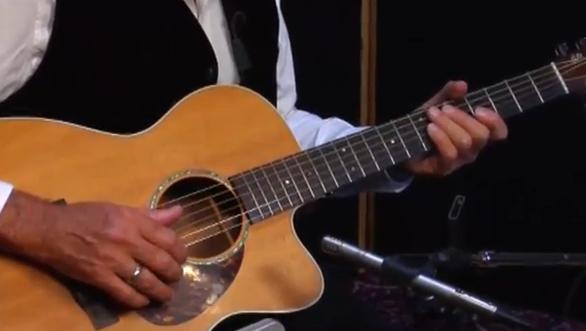