How to Play Blues Guitar with Rhythm Chords 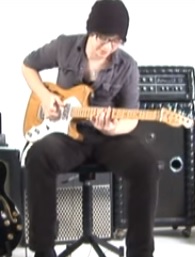 Here’s the next sample clip from the upcoming Blues Master Class.
In this one, Sol talks about a critical topic: Rhythm! Check it out!

One really important method of blues guitar playing,
it’s a vital, vital part of the whole concept is
the idea of rhythm playing and using chords.

Now, chords doesn’t just mean comping behind the
guy who’s playing the solo or whatever. I mean,
don’t be put off by that idea. It doesn’t mean that.

You can make it far more interesting. I mean,
you can use different chord shapes to get certain tones.

You can actually use little fractions of chords,
like parts of chords, to get certain parts of
the lead playing. You can apply it to lead
playing and use it like that, just like we
did earlier with our… That little thing we did.

Now, I’m just going to show you like a basic structure.

So we’ve got that. And that’s pretty much about as
simple as it can possibly be. We’re just using one 7th shape.

Now, let me show you the different ways you can play
a 7th chord so you can really utilize it and get
the most out of it. Now, you can create counter
melodies using this 7th shape.

We’re using the same one here, which is just a
major but with the octave taken away so you get
this minor-7th type thing with the major 3rd
on top that makes it a 7th chord.

Now, if we add another minor 7th on top, that
would be this note. You’re just going to uses
your pinkie to stretch up and play that.

So you can actually play… Now, you can use that
to create little counter melodies that run
under the chord. Like…

You see what’s going on there? It’s just —
we’re just using this… And if you start using
that, using the major throw-out that we have
in there as well…