here´s a cool guitar progression in the style of kings of leon!

And please don´t forget to check out the lastest DVD from Jon! 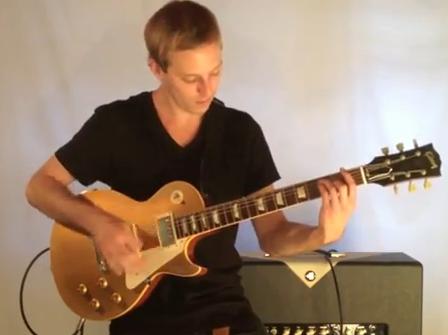 How’s it going everybody.
My name is John McClennan and I’m here
with guitarcontrol.com. In today’s
lesson what we’re going to look at
is a Kings of Leon or just basic
rhythm guitar playing within a style
of rock.

We’re going to start out, you may be
familiar with your six-string barre
chords, like this kind of thing, based
off of an E chord. And one of the things
that I want to emphasize with this lesson
is that when you play a big six-string
chord sometimes with a lot of distortion
there are so many notes that they kind
of just mush together. Where a lot of
times when you play less is ends up
sounding bigger.

What we’re going to do with this chord,
it’s a C by the way, on the 8th fret, and
we’re just going to play the one, two, three,
four, first four strings. We’re not going
to barre all the way to the high strings.
So we just get this kind of lower sound.
And then what you’re going to do is take
your 1st string finger off and you’re going
to get the open E string in there and the
next chord becomes C over E. Here’s your
C over E. Then to F on the 1st fret.

My basic rhythm is just one, two, three,
four, eighth notes, which is one-and,
two-and, three-and, four-and. And again,
one of the most common rhythms in rock
music. But what’s cool about this is the accent.

Again, just using four strings, it can
have a really big sound. And one of the
exercises you might want to try is taking
a song that you already know and seeing if
you can voice all the chords with that kind
of shape, just the four string barre chord.

Once again, click the link below for the
tabs and we’ll see you in the next lesson.
Thanks for watching.

Guitar Control presents instructor Darrin Goodman with 3 Easy Electric Guitar Song Intros that you can learn today. Be sure to get the free tabs

Check out this easy single note guitar riffs lesson for beginners from Guitar Control instructor Darrin Goodman. Be sure to get the free tabs to

How To Play Breakdown By Tom Petty

Learn how to play the classic Tom Petty tune Breakdown on guitar with Guitar Control instructor Darrin Goodman. Be sure to get the free tabs

Learn to play three easy single string beginner guitar riffs from Guitar Control instructor Darrin Goodman. You can get access to free tabs for this