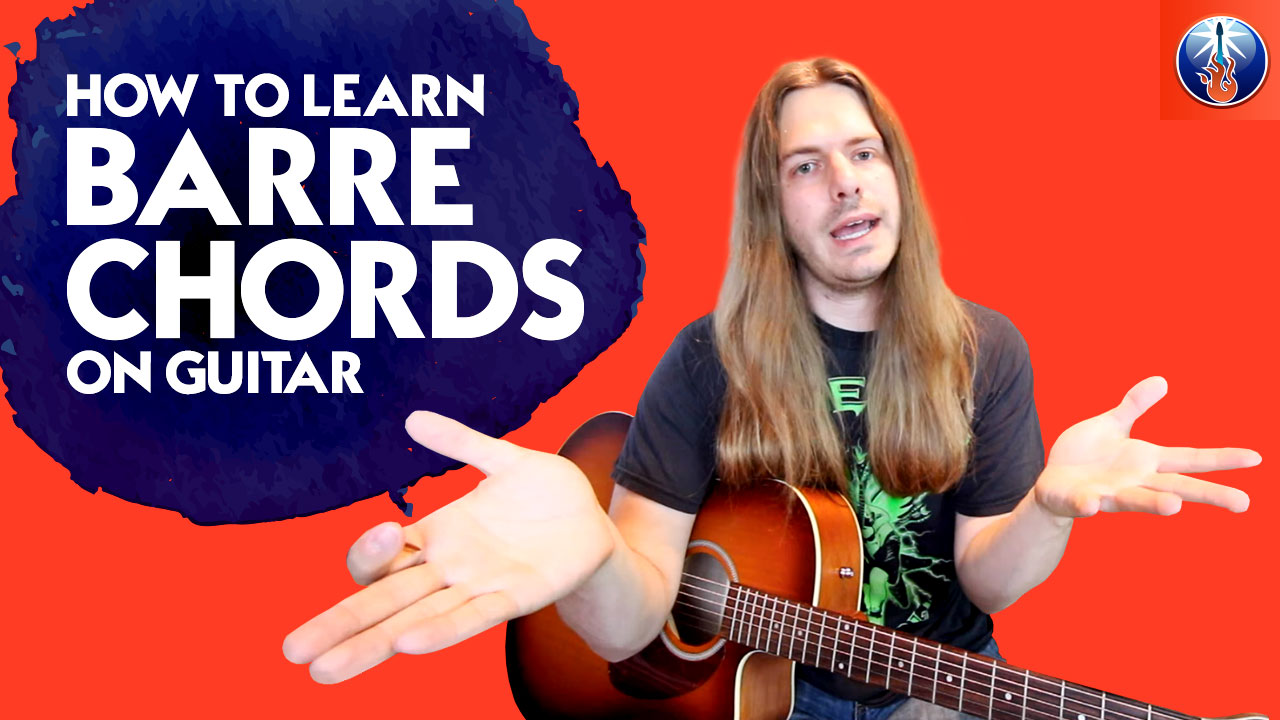 How to Play 24 Barre Chords in Under 2 Minutes

Step 1: Learning The Notes on the 6th String

So you are probably wondering if it is possible to learn how to learn barre chords on guitar in less than two minutes. And the answer is, yes it is, and in probably way less time than that! Today we are going to learn two shapes of chords. Starting on A. Now what I would recommend knowing, is learning your notes on at least the low E string, the 6th string. Know how to figure out each frets note name by moving up fret by fret using the musical alphabet; A, A#/Bb, B, C, C#/Db, D, D#/Eb, E, F, F#/Gb, G, G#/Ab and then repeat! Knowing these notes will help tremendously.

What is cool about this though is that once you have this shape down, wherever you decide to move it, it is still a major barre chord. So say you want to play a G major barre chord, you would move it to the 3rd fret 6th string. Move the entire shape with your pointer finger moving to the 3rd fret 6th string. This is where knowing your notes on the 6th string really come in handy. If you want to move the major shape to an F, move your hand down to pointer rooted now on the 1st fret. For a D major chord on the 6th string, move up to the 10th fret. 8th fret is C, 7th fret is B, and 5th fret of course is A again. That is the major shape rooted on the 6th string.

If you are enjoying learn these barre chords be sure to check out Robert’s lesson on how to play Down on the Corner by Creedence Clearwater Revival to get you strumming barre chords. So just to reiterate, you can do this major barre chord shape all over the place. You can do it in the open position just making an open E major chord, pointer on the 3rd string 1st fret, middle finger on the 5th string 2nd fret and ring finger on the 4th string 2nd fret and all other strings open. Then you apply the barre and your fingers shift to having your pointer hold down all the strings from the 6th string down, then your ring finger is two frets down from your pointer and on the 5th string, pinky is also two frets down from your pointer on the 4th string and middle finger is in between the two fingers, so on the fret in between the pointer and the ring and pinky fingers on the 3rd string. Moving this shape all the way up from the 1st fret to the 12th, gives us 12 different barre chords all ready!

Now to change this major shape to minor, simply just pick up your middle finger off the fretboard and that’s it! Now you have even less fingers on the fretboard and now you have a Minor barre chord shape. So A minor would be played with your pointer finger barring all the way down from the 5th fret 6th string to the 5th fret 1st string, your ring finger on the 5th string 7th fret and pinky right under on the 4th string 7th fret. Now we can apply the exact same thing we did with the major shape, this minor shape is always a minor shape when rooted on the 6th string. So moving it all over the fretboard gives you more chord options! Moving it to the 3rd fret give you a G minor, 1st fret give you an F minor, 5th fret gives you an A minor, and the same thing on all 12 notes, giving you 12 different, minor chords.

24 chords! That simply. How crazy is that! Robert would like to take this one step further because there are a few things that come into play through barre chords. One thing Robert has learned from teaching over the years is that your hand size is actually a little important. He explains that this is true because when you bar the strings, sometimes, and this is just pure luck of the draw, the strings will land right in the joints of your fingers which if this happens you might end up with some dead notes so you will need to work on adjusting your fingers placement. It is really important that all the notes ring out clear. So if you are one of these people where your joints hit, you are going to want to bring your pointer finger up, past the top of the fret a little bit.

The other thing you really want to look out for, is making sure your finger is as straight as possible. Robert mentions that when he was starting out with barre chords his pointer finger would be pretty angled. This is a very common thing. Thats nothing to be afraid of, it happens, but it’s all about building up your strength and barring.

With bar chords you really need to watch out because you can actually hurt your hand by doing these. They require quite a bit of effort, especially if you are doing them on the acoustic guitar. Robert is using an acoustic guitar in the video with medium gauge strings and notes that it isn’t the easiest thing in the world to play barre chords on it. So make sure that your hands are real nice and warmed up and stretched out while doing these, otherwise you could hurt your wrist.

As far as pushing the strings down with the Major chord we have to use all four fingers which can be a little bit tough. So our thumb placement is actually extremely important in getting this chord to sound out. So when I play this my thumb is actually in line with my index finger. What that is is you want this pinching motion to be happening. You can see Robert do this at the 5 minute mark. It’s not that far off from how we actually normally play the guitar, but we need a lot more effort this time because we have to hold down six strings.

And again a huge part of it is knowing your notes, to be able to move around. It’s one of the most beneficial things you can do. It helps you with scales, too. Robert recommends that you learn the note on all 6 strings versus just the 6th, but if there is one string to learn, learn your low E, the 6th string. Because for one, when you learn your 6th string, the low E, you also just learned your high E, the 1st string. Since they are the same note open, they are of course they are all the same notes.

Step 5: Putting The Barre Chords in a Progression

Next, we are going to go to D Major, D Major is just two frets up, so now we move our shape to pointer finger on the 10th fret 6th string barring all the way down, then ring finger on the 5th string 12th fret, pinky right under on the 4th string 12th fret, and middle finger down on the 3rd string 11th fret. So again the huge benefit to barre chords is that you learn one shape but can play every major or every minor chord, but barring is difficult. Open chords can feel easier but every shape is different.

So Robert is playing G major, C major, D major, back to C major all barre chords. You might be asking yourself why we would want to do these as barre chords since they are all really easy to play back to back in the open position and are all pretty convenient where they are all placed, but if you had two guitar playing at the same time you might want to have one guitar playing the open chords and one playing the barre chords, and they do sound a little different even though they are the same chords and notes.

Robert then plays the G major chord open versus the G major chord open.the open chord has obviously a lot more open strings ringing out and the barre chord sounds higher pitched since we aren’t using the open notes. A lot of people like to use barre chords if they like that ukulele kind of sounds. There are a lot of different vibes you can kind of pull out of that style.

Recap: How to Play 24 Barre Chords in Under 2 Minutes

I hope you enjoyed learning how to learn barre chords on guitar! A total of 24 barre chords in under two minutes. Barre chords are extremely effective, efficient, if you’re playing in a band you can use them to have different voicings of the same chords played live. This happens a lot of times in recordings. Using barre chords creates a different vibe and remember it is so helpful to learn the notes on at least the 6th string so you can easily move these two shapes we learned today around and be able to play any major or minor chord! And of course, as always, have fun! 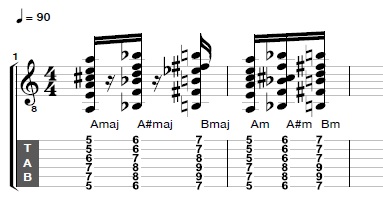