Jack Frost is back!!!

This is gonna be awesome — here’s the opening lesson from the DVD. Check it out!

This is Jack Frost here again on my third instructional
DVD. This DVD, we’re going to talk about more rhythm
playing. I know I totally went crazy the last time
talking about rhythms, but I made sure you guys knew
you have to be a rhythm player before you’re a soloist.

I’m going to give a little background about myself. My
name is Jack Frost, again. I’m 44 years old. I’ve been
playing since I was probably 13; professionally since
I was 19. I’ve been in such bands as Sabotage, Lizzy Borden,
Joey Belladonna from Anthrax solo band, Chris Volz from
Flaw, Seven Witches, I’m going on tour right now with
Hades, a bunch of solo records, a studio musician.

All right, guys. Part one of the DVD, we’re going to
talk about alternate picking or down/up picking down. A
lot of people have a different idea how this is, what’s
right, what’s wrong. Listen, there’s no law that says
you can’t down-up-down or down-up-down-up-down-down.
But a lot of people are like, well, the book says…
Listen, we went through this a lot of times. Picking
is in the heart. You can’t tell Tony Iommi he’s picking
wrong, or James Hetfield that his pick is like a machine
down, or Scott Ian that you can’t pick this way.

So we’re going to talk about like mainly the first
portion of this is going to be down-up-down. So we’re
going to use, say, a basic E scale, like an E pattern.
All we’re going to do is this, here’s the rhythm. It’s
down-up-down. I’m going to use a pure power chord.
So we do 7-9 on your E. So you’ve got your 1st finger
on your 7th fret on your A string; your 3rd finger —
remember, this is one, two, three, four, how we do it —
on your 9th fret on the D string; and your E is open.

Now, we’re mainly going to be just picking on the
low E string, but we don’t want the noise and the
hum to make it sound out of key or out of tune.
So we’ve got to keep our fingers here to block it,
so it keeps it really smooth and tight. So here we go.
We’re just going to do like a quick one, two, three.
Now, let’s pick-up the speed. It’s a three pattern,
so it’s one, two, three, so if your drummer is going
double bass. So here we go, we’re going to pick-up
the speed. Every fourth measure we just do a downstroke.
So here we go. This is nonstop, down-up-down and the
last pattern is a down. So here we go.

Now, we can piece this together. Let’s say we stay
on the E and we’re going to move around to an F to a D.
Okay? Now we’re going to stab off the low E onto the
chords. So it’s going to be one, two, three, hit; one,
two, three. So check this out. All we’re doing is we’re
doing one, two, three, then we’re stabbing on the fourth
note. Up to speed. Play along with me just really tight
and smooth. I’ve really slowed it down so beginners
and intermediates can play along. Again. 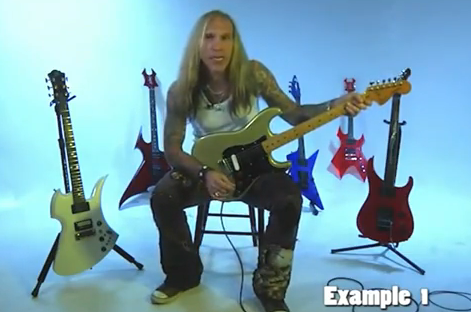