How to Use Pentatonic Box Patterns on Guitar 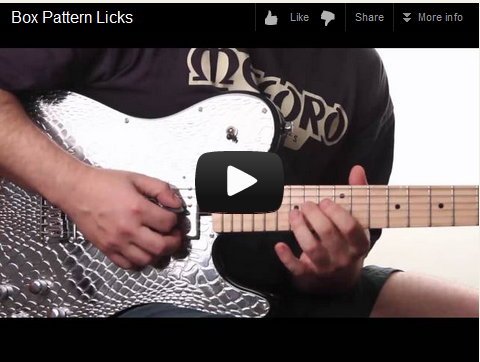 Okay, so last time I showed you this pentatonic
lick that goes like this. Today I want to show
you just like kind of the philosophy behind it
and how you can come up with your own licks.

So basically what I’m doing is riffing off the
E pentatonic scale. I’m using what I call boxes,
like these little rectangle shapes. We’re playing
here on the 14th to the 12th fret on the G string
and then again, 14 to the 12, from the D string,
so it makes this little box. The idea behind these
kind of licks is just to kind of exploit this box
shape and just kind of repeat it in different ways
and on different strings.

Now, it doesn’t have to be descending. You can try
ascending. So let me just show you a couple examples.
Let’s just take this one. Again, it’s the same pattern
we started with, but going up. Also, I want to emphasize
alternate picking, so up down; up, down. Or, if you just
want to focus on the picking hand a good exercise is
just like, because that’s the same picking without
worrying about the left hand. Okay?

Let’s just focus on this. The whole idea is to try to
make these licks musical. So an easy way you can do
that with this pattern is repeat the box twice and then
like land on another note. So we can do that with
basically every degree of the scale. I’ll start out
with this one. So we’re repeating this box and just
hitting the D note.

And just as we were doing before, now with this —
let’s just go back to our original lick. So we were
going down one box, down another box and then going
back up. So we’re kind of repeating a box. So you
repeat that. We can try the same pattern going up,
let’s say starting from here.

Now, there are different ways to combine these
patterns. For example, you take a four-note pattern
and one thing you can do is just repeat it. Another
thing you can do is if you move that to the next
set of strings to get and eight-note pattern, you
can just repeat that eight-note pattern. And then,
you can also combine the four-note and eight-note
patterns, like this. You can just take a four-note
pattern and instead of repeating it, just move it
to the next string. You can start moving it like
horizontally or vertically and you can just combine
it with like licks that you already know, something
like that.

All the examples that I just showed you were all
descending patterns. You can try the same thing
ascending. But just try to make it musical. Again,
two different ways to make it musical are just like
doing a repeating pattern and then finding a cool
[unintelligible – 04:45] note to end it on.
And then, combining it with like another lick that
you already know.