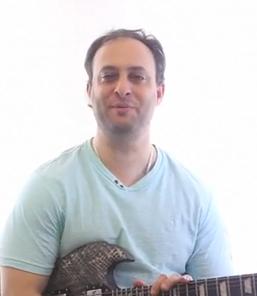 Hey, guys. Thanks for tuning-in. My name is Claude Johnson.
This is guitarcontrol.com and I want to talk about how to
play sweep arpeggios.

An arpeggio is the notes of a chord played separately.
For example, A major has the notes A, C sharp and E. A
sweep arpeggio means you’re sweeping across the strings
in one motion. You can do this here. There are actually
lots of different patterns, but I’m just going to show
you one.

Twelfth fret A string, hammer-on to the 16th fret and
then you’re going to go up on the 14th. This is all with
the ring finger. You’re going to have to flatten it out.
One octave would be… Two octaves would be… And then
you can hit that high A note on the 3rd octave.

On the way up I like to hit the high E string and then
turn it around. You could do just a hammer-on if you want,
but you’ll need to start the upstroke there and then
instead of pulling off I get ready to go into another
downstroke.

The key with this is to flatten-out your ring finger.
You get it here and then you really just have to flatten
out so you’re getting all three. On the way back down
it’s even trickier because it’s not going to work if you
just start on the tip of your finger here. You have to
anticipate that you’re going to be using it for all three
strings. You almost hit like half way up or about here on
your finger so that when you flatten it out you get all
the strings.

I probably need to practice that a little bit myself, but
that’s the basic idea. You can check the link in the video
description for the tabs and I’ll catch you soon.
Thanks for watching.

More Lessons on Scale and Arpeggios

Chords on Guitar: The Beauty of Major 7 Arpeggios

How to Play 2 String Arpeggios

How to Read Guitar Scales