How to Play Pentatonic Licks with Position Shifting 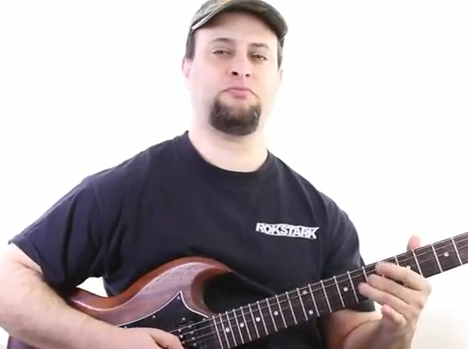 Hey, guys. Claude Johnson from guitarcontrol.com.
How’s it going? Today I want to show you a little
blues lick that involves position shifting and
show you guys how you can use this to create some
of your own licks. So here’s the lick.

So let’s zoom-in on the fretboard and I’ll show
you what I’m doing here. Today we’re in the key
of A pentatonic. I’m going to show you how to use
some position shifts to create different licks.
There are different ways to create interesting licks.
First of all, let’s just start with ground zero,
the basic pentatonic scale. Hopefully you guys know
this one. If not, go ahead and check out my beginner
lead guitar course. But you can just stay in this
box for starters and create cool licks.

Obviously adding bends and vibrato helps. You can
start adding other notes if you want. You can also —
obviously it extends to different patterns. You can
do like three-note per string patterns. But we’re
not going to do that today. We’re just going to stick
with no other notes, just basic pentatonic scale and
we’re going to shift between the position right behind
the root position and the root position itself.

This lick today, we’re going to start off kind of
at the top part of this pattern. Here’s the position
shift. It goes like this. What we’re doing here,
we’re playing the high E string and then the B string,
5th fret to 3rd fret, a little triplet there. So you’re
doings this with your first finger and ring finger,
but then when you slide up you’re going to be using
your middle finger because that finger is free. Notice
that this note, the D, is the same as this D.

Then you’re going to go… So you have the D and
then your 1st finger goes on the high E note, which
is the 5th fret of the B string. Back, another triplet.
Then when you come back down here you’re going to be
using your ring finger again. So real slow. Then you
can end it off with just three notes going down.

It doesn’t sound too bad going slow. Its designed
to kind of be a fast lick, but even slow it kind
of sounds cool. A little bit faster. You can try
different timing. It doesn’t have to be exactly
the same. You could start it — instead of here,
you can just start it here. You could end it like
this, with a double. Kind of an Eric Clapton lick.

But the important point is that you’re shifting.
You’re here and then you slide. Another simple
example of shifting positions would be you can
start here then go back. So here with your ring
finger on the 7th fret, just slide down to the 5th
fret. Then your fingers are kind of set up to be…

Hopefully that will give you some ideas and that’s all
for now, folks. Have fun and I’ll catch you next time.