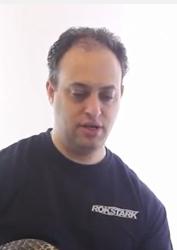 Hey, guys. Claude Johnson here from guitarcontrol.com and
I want to continue on to talk about music theory. We talked
about the scale. What I want to show you next is that you
can build chords from the scale in a key. So let’s stick
with the key of C which we said has no sharps, no flat.

Here’s what you do. Start with the first note of the scale,
which is a C, and then you’re going to stack notes. We’re
going to stack three notes together to form a chord. How do
you stack the notes? Well, you just go to the next note of
the scale from wherever you are starting, but you skip notes.
Instead of playing the first note of the scale — one, two,
three — we’re going to play 1, 3, 5. So start on the C, skip
the D and go to the E; skip the F and go to the G. So we have
this… If we play them all together, that’s called a C triad.
Triad means three, like tri. That’s your C triad.

Now, if you learn like a C open chord which hopefully you
should know. Check-out some of my other videos on like the
seven basic chords that you should learn first when you’re
learning chords. C is one of them. But if you look at this
chord, remember we said it’s C, E, G. So what are these
notes? C, E, G, another C and another E.

Now let’s go to the next note of the scale, which is D, and
we’re going to do the same thing. D, skip the E, go to F; so
D, F. Skip the G and go to A. So you have D, F, A. That happens
to be D minor. There’s your D minor open chord. This sounds
different than this. It’s called a different voicing.
This one you have your D, your A, another D and an F.

Notice in this particular voicing you have your D which
is called the root of your chord. So the lowest note of
your chord is the root, and then you have your A. So
instead of D, F, A; this one has the A coming first. D,
A, your D again, which is the octave. We talked about
octaves in the first lesson. And then your F, which is
the third. You could spell this out D, F, A or 1, 3, 5
and that’s a minor chord. We call it a minor chord because
the distance between the first two notes, the root and the
3rd, is a minor 3rd interval, which is three half steps.

The interesting thing about the way we’re building the chords
is that no matter what key you’re in, it’s going to be the
same pattern. If we’re in the key of C, the first chord is
going to be a major chord, C major. The next chord is going
to be a minor chord, D minor.

Back to the key of C. It’s always going to be this: major
chord, minor chord on the 2nd degree of the scale. Let me
just explain. Going back to C. One, two, three, four, five,
count like that. So one chord is major, two chord is minor,
three chord is also minor, four chord is major, fifth chord
is major, sixth chord is minor and then the 7th chord is
going to be diminished. That’s a different animal. We’ll
talk about that later. But for now understand major and minor.

Also, just hear the difference between major and minor chords.
Traditionally major is described as happy and bright and minor
is a little bit darker and sadder, although it doesn’t sound
that sad to me. It just has a different quality. Another big
part of ear training is listening to the different between major
and minor. When we get into stacking four-note chords there’ll
also be what’s called dominant chords, like for example, G7.
That has a different sound, kind of like a bluesy sound.

I guess we’ll pick this up in another video. Again, if you’d
like to get some DVDs that explain this deeper and how it
applies to learning your favorite songs, just check-out
guitarcontrol.com/beginner. I go into things deeper than
I have time for on these little YouTube videos.
I hope you check that out.