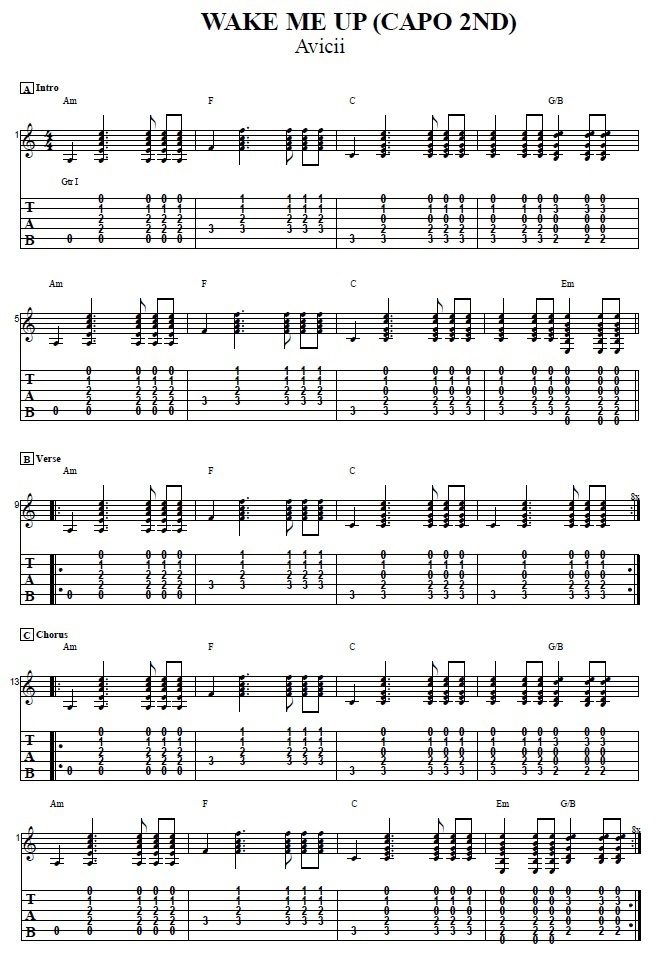 Hey everybody, how’s it going? This is Darrin Goodman with guitarcontrol.com bringing you this video lesson. Today, I want to show you how to play a song called Wake Me Up and I hope I’m pronouncing the artist’s name correctly, Avicci. Never heard of him, but had a private student request this song and went through it and I thought it’d be a good one to show you guys, so be sure to click on the link in the description for the tabs. Let’s get close up and take a look at it.

And then we’ve got G over B. How I’m doing this, I’m using my second finger on the fifth fret of the … excuse me, the second fret of the fifth string. And then strings four and three are open. And then I’m on the third fret of the second string with my fourth finger, and the first string is open.

Now, you may have learned the chord this way … But for the way the transition moves, it’s easier to do it this way.

For the strum for this, we start off, we’re on A minor. And we’re just going to play just the fifth string open, and that’s beat one. So it’s like, one. And then on beat two, we strum the whole chord. Now, beat two is a dotted quarter note, so it’s like one, two, three, and four and. So, single note, down; down, up, down. This is the strum for the majority of the song.

Now, we switch to F. We do the same thing, but now the single note we’re playing is the fourth string. Then to a C, back to the fifth string for our single note. That’s the first three measures.

And then on the fourth measure, we stay on C and we do one, two and; and then we switch to the G over B. This is why I was saying that this transition here is that if we … If you go from C, if you just take your third finger off, move your second finger from the second fret of the fourth string to the second fret of the fifth string, and then drop your fourth finger down onto the fourth fret of the second string. And just leave your first finger there on the second string because right after this, we go right back into an A minor. So, that fourth measure, we’re on C. One, two and, and then switch to G over B, three, four and. So … And then it more or less starts over.

So, those first four measures.

And now this time on the … We stay on C again. One, two and; and then we switch to E minor for three, four and. That’s the entire intro. All right.

And then from there we go into the verse, and the verse is similar to the intro. We start off with that A minor, to F, and then C, and we just do two measures of C. The verse consists of these four measures, but it’s actually repeated eight times, so you’ve got …

And then, like I said, that repeats eight times.

I believe I just played it four times, so like I said, it repeats eight times. If you’re looking at your tabs, you can see that there, that it indicates to play it eight times. All right. And then from there we go to the chorus.

For the chorus, again very similar. We’re in A minor, F, C. This is like the first four measures of the intro for this first part of the chorus, so it has that … where we stay on C, and then go to the G over B, so you have … And then back to A minor, F, C.

And then for the fourth measure here, we go E minor, one, two and. And then to G over B for three, four and. So, that second half of that chorus … And then that repeats. The whole section for the chorus, the whole both parts that we just did, that is also repeated eight times. So, the chorus all the way through … Repeating. And then like I said, it repeats eight times.

All right. Well, I hope you enjoyed that and you got something out of it. If you like this lesson, give me a thumbs up, leave a comment down below. If there’s something you’d like to see either myself or one of the other instructors at guitarcontrol.com doing a future lesson. Anyway, that’s all I have for you today. Until next time.