How Important Is Guitar in Jazz Music

I’ve often thought that the phrase “jazz rhythm guitar” is redundant, mainly due to the fact that in jazz big bands of the 1930s and 40s, the guitarist was considered an essential part of the rhythm section (guitar, drums and bass). They usually played four strums to the bar, although an amount of harmonic improvisation was possible and in some cases, encouraged.

It was not until the post-World War II era that the guitar took off as a versatile and featured melodic instrument. In the beginning, jazz guitar was nothing but rhythm guitar. With the emergence of the small jazz combos of the 1940’s and 50s, the guitar began to unseat the banjo as the primary chordal rhythm instrument in jazz, mainly because the guitar was capable of greater harmonic range, and it sounded tight with the upright bass, which, by this time, had replaced the tuba as the prevailing bass instrument in jazz.

The tuba has to be one of the most questionably masochistic musical instruments of all-time, by the way.

On the other hand, the actual “rhythmic” aspect of rhythm guitar is generally much less important in jazz than in, for instance, rock or metal. At the same time, jazz guitarists are expected to have an infinite familiarity with harmony.

Check out this BASIC JAZZ GUITAR LESSON ON CHORDS

Like every other form of contemporary music, the sub-genres of jazz include (but are not limited to) bebop, crossover, free, gypsy, and swing. In each genre, the rhythm guitar performs a different function to varying degrees. In bebop and swing, the rhythm guitar is doing a ton of comping. [Check out Freddie Green on “One O’Clock Jump” for the quintessential jazz rhythm guitar.] 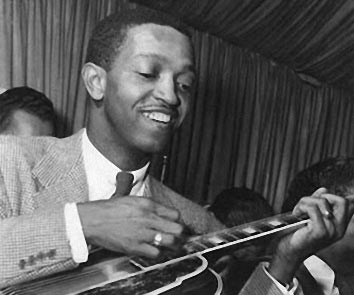 Generally speaking, in many popular styles of music, such as rock and metal, the rhythm guitarist usually performs the chords in rhythmic fashion which will establish the beat or groove of a jam. When jazz guitarists play underneath a song’s melody or other solo improvisations, it is called “comping”, short for “accompanying”. The comping style in most jazz styles differs from the way chordal instruments accompany in certain popular styles of music.

Meanwhile, unlike rock and metal, a jazz guitarist will almost absolutely be intimately familiar with music theory, c.g. harmony. There’s no such thing as a “shitty jazz guitarist.” Those cats either know their stuff, or they don’t play jazz. Period. In addition to knowing every chord inversion, movable shape, substitution, alternative diminished, half-diminished, and augmented chord, the jazz player must – no exceptions – be sickeningly familiar with scales and progressions. And this is where things start to get, well, involved. Ornaments, grace notes, slides, and muted notes. Does re-harmonization sound like something you’d be interested in?

And we haven’t even touched on improvisation yet.

If you are into jazz guitar and music, I recommend you to check out this course: