How to shred with finger tapping technique 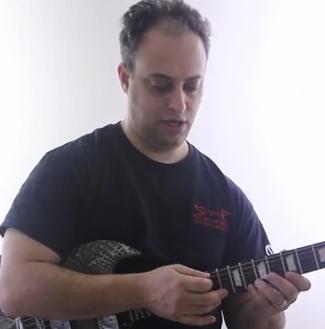 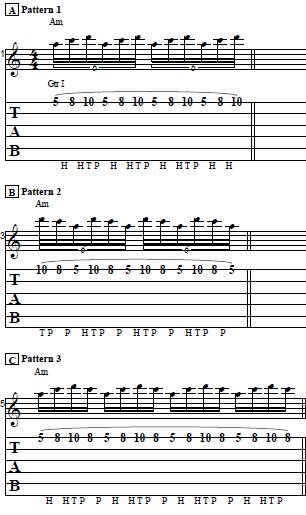 Supercharged Soloing Made Simple Hey, guys. Claude Johnson here from guitarcontrol.com. Today I want to talk about the tapping technique. So what is tapping? Basically I’m going to use my picking hand and I’m just going to tap on the fretboard like this instead of using the pick. That’s like normal playing, but then I’m going to tap instead. It’s kind of replacing the picking motion. The basic idea is that I’m not going to let go of my pick. I’m holding my pick between my thumb and 1st finger so that I can pick normally. And then when I want to play a tapping lick I’m not going to change that, but I’m going to tap primarily with my middle finger. Now, you can get into all kinds of two-finger tapping or three-finger tapping or four-finger tapping, but we’re just going to stick with one-finger tapping for now. I’m using my middle finger. Let’s say I’m in A pentatonic. So a real basic lick, try this: 5th fret, 8th fret with the left hand; 1st finger pinkie, I’m going to tap the 10th, right up the basic scale. Make sure you press that hard enough. You can do all kinds of fast licks that are easy. You can repeat three notes up. You can go down. You can go back and forth. I think it sounds very musical as far as little patterns go. Then you can do this; you can descend down. What I’m doing there, again, basic pattern back and forth and then I’m going to hammer-on to the next string. I’m hammering on to the 8th fret on the B string. Then I’ll start the pattern over on that string. I’m staying in the pentatonic the whole time. I talk about patterns like these in Super Charged Soloing Made Simple. Here’s just one more. Instead of just going like this; you could go… You’re going one more note up the scale. You can apply this to different strings as well. Play around with that and try to combine it with your more feel-based stuff and you want it to blend smoothly. You don’t want it to be like, okay, I’m playing normally, now I’m going to try some crazy tapping thing. It should just be an extension as much as possible. I go over lots of cool tapping ideas, patterns, exercises, lick and so forth in my course called Super Charged Soloing Made Simple, which you can check-out at guitarcontrol.com/supercharge. Check it out and have an awesome day. I’ll catch you later. Take care.

Tapping Lick in the Style of Eddie Van Halen! Part 1

Tapping Guitar Lick in the Style of Joe Satriani

A Minor Arpeggio with Tapping Technique

Learn How to Bend with Tapping