How to Play C#m Pentatonic Lick in Paul Gilbert Style 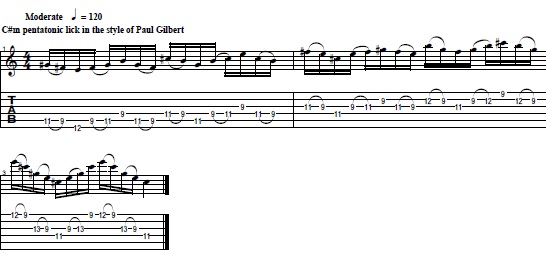 Hey, guys. How’s it going? This is Gaby Soule with
guitarcontrol.com and in this video I want to show
you this lick by Paul Gilbert. It’s in the key of
C#m and it’s all made out with the pentatonic scale.
So let me show it to you step by step.

In this lick, every time you have two notes in
one string, they’re always either hammer-ons or
pull-offs. There are very few notes really picked
in this lick. Okay? And so 16th notes.

This pattern that I have just played, the only
thing you have to do is to keep on repeating that
every time you go to the next string. This time
we’ll do the same thing from the 4th string.

This time we’ll go to the 3rd string and it goes
like this. It’s, again, a pull-off from the 11th
fret to the 9th fret of the G string. Now on the
4th string it’s in the 11th fret, now again, to
the G string 9th fret to 11th fret with a hammer-on.
And in the 2nd string this time with your 1st finger
on the 9th fret and you end up, again, on the 1st
string with a pull-off from the 11th to the 9th fret.
So that part is like this. All together.

You can also practice those every three strings; pick
one of those and just keep on repeating one of those.
They’re really very good exercises, too. You don’t
have to necessarily change from one string to the other
to make a good exercise out of it. You can just stay
there and it will work as a good exercise, too. If you
want to change, it sounds like this.

The last part is some kind of arpeggio made with two
notes per string and it’s actually a C#m arpeggio.
It’s like with string skipping there. It’s not
very difficult, but it sounds very good.

It’s a pull-off from the 12th to the 9th fret; now
from the 13th fret to the 9th fret of the 3rd string,
on the G string; now in the 4th string you play the
root or the arpeggio, 11th fret, C sharp. That was a
descending arpeggio. You play ascending. It’s again,
from that C sharp, you go back to the 3rd string. It’s
9 and 13 with a hammer-on, and, again, in the 1st string,
9th to 12th fret. It goes down, up and it goes down again.

So that’s the lick. I hope you liked it. Remember
that you can get the tabs by clicking in the video
description below. Thank you very much for
watching and I’ll see you next time. Bye bye.