Hey, how’s it going this is Jon McLennan with Guitar Control, I’m bringing you this video lesson and this is from the track number four off a CD C’s Classic album “Back and Black”, we’re breaking down all the songs on the album step by step. This song is called “Givin the Dog a Bone”. 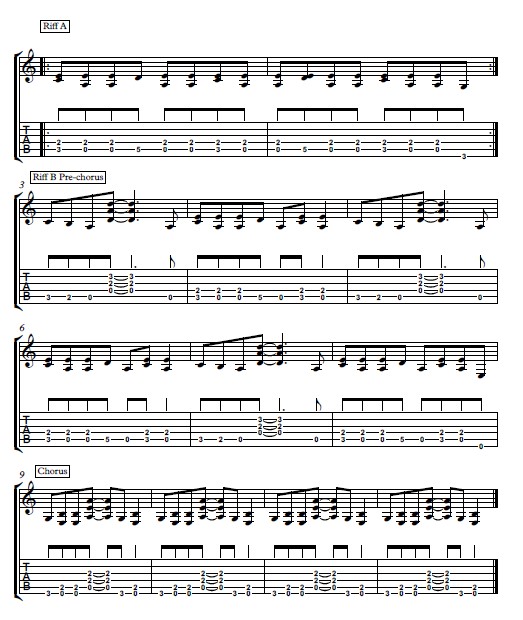 Here’s the first rhythm figure and this is such a cool driving riff you’ve got the first finger down on an A5 and what I’m basically doing is playing the 5th string open then barring it with my first finger. 2, 2, kind of those next two strings okay now the first thing that you start you have that A shape and then you put your second finger down on the 3rd fret 5th string and you play that note together the A and then you go off immediately.

Sometimes I’m kind of pull and pull it a little bit to give it like a bluesy kind of flavor but one and then I do the same thing but I’ve got my pinky reaching out to the D note here on the 5th fret 5th string and then on beat four you go back to a 3rd fret so first measure is my hands just kind of doing all down strokes hammering the 8th notes 1 and 2 and 3 and 4 and 1 and 2 and 3 and 1 and 2 and go.

Here’s the second measure 1, 2, 3, 4, and I try to do these together slowly you and it starts again. I just bring that finger down to start on the 3rd fret 5th string again so 1 and 2 and 3 and 4.  Just a pretty cool little rock and riff there on A. Then when we get to the next part that goes for about like 45 seconds of the tune and then we go we do a little variation here so this goes 3rd fret on the 5th string 2nd fret open and you play a D chord that A in the bass and then we play the open A and then you’ve got a one little variation there 1 and 2 and 3 and 4, slightly different than the first part and three times you know the last time you we’re going into the chorus that would be playing the open A then 3, 0, 0, 5. After that main riff and that little pre-chorus part we head into the chorus let’s break that part down now.

So next we lead into this awesome riff for the chorus and it exemplifies a really cool thing, you hear in rock and roll where like the lead line, the lead singer doubles the guitar riff so that’s basically your melody and what you do is you got this kind of shape just like the A that we had earlier, from that we bring it up one string, so we’ve got zero, two and you’re going to start by using the third finger or the second finger. I’ll try to be consistent, I’m using my third finger and I’m going to play the 3rd fret and just take that 3rd fret give a little pull one and two and I play two of those E power chords then you move down one string to an A power chords, then you play three again and then low E.

You know a lot of rock and roll stuff has this like it could be legs up that kind of stuff where you’re basically playing an open chord like an A or an E with one finger using your other fingers that’s why I’m not playing like the A like this like I would maybe on acoustic guitar and if I have these fingers free I can grab other notes halfway and then back to the 1st rhythm figure and there’s a guitar lead guitar playing on top of that so that would go eight times for the chorus and then we would repeat everything again. Don’t forget to click the link below so you can get the tab.

Let’s break down to the last section, the double chorus and the outro. The last chorus has a cool twist you basically play the same way that we did on the earlier courses in E, same riff then you do that again goes up higher. Then the band moves up and they do the same thing down one string and there at the end what I basically did was I played the chorus the same way and then I moved it down one string so it served like I moved to the A and everything goes down one string now I’m on the fifth string play a D chord do that eight times as well.

We’re here on the last time go to these chords you play C should be like a C, D, C, C, chord you know 5th string 3rd fret muted to this next string open chords and then I do C to D kind of that real and a lot of times I just play D without the high string you can throw that chord as well.

For me I think because I’m moving so quickly between those chords I like just maybe even a 2 note version of this and you go to G, D and there’s a Griffin black unity minor pentatonic. It’s just kind of a typical rock and roll one day. Thank you so much for watching I really hope this lesson inspires you to keep playing guitar and keep learning new songs for more information you can click on the annotation on your screen or the iCard if you’re on mobile and check out some of the courses available through Guitar control.com. Make sure to subscribe on our YouTube Channel and we’ll see you in our next video lessons, thanks for watching.