A guitar scale is a scale specifically laid out for guitar. Scales for the guitar are the same as they are for any other musical instrument as far as the notes they encompass, but when a musician thinks of a scale as a guitar scale, he is most likely thinking about the specific pattern of the notes as they apply to the neck of the guitar.


A guitar scale pattern can be major, minor, pentatonic, blues, or any number of other unique sounding scales and modes. Most common scales are derived directly from the major scale, and all of them can be played in patterns on the guitar. Take a look at the pentatonic pattern below and compare it to the major pattern. The major pentatonic is a 5-note scale that omits the 4th and 7th degrees, but you can apply the pattern to the guitar and move it the same as you do a major pattern. 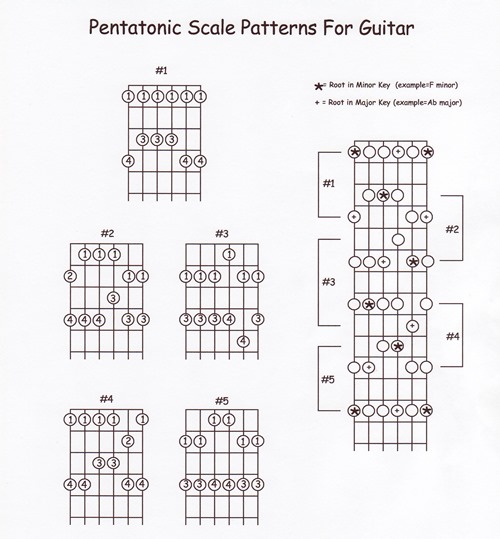 A guitar scale is always a pattern. Any scale can be applied to the guitar once you know the notes of the scale and plot it out on the fretboard. While it isn’t necessary to know every possible scale you could play, as a guitarist the major and minor scales, the blues scale, and the major and minor pentatonic scales are pretty fundamental. Jazz players will add the modes, particularly the Dorian and Aeolian. Like other scales, modes are plotted on the fretboard as patterns.

Playing a guitar scale teaches you note positions on the fretboard and helps facilitate faster, smoother execution of the notes. Learning all the basic scales and adding a few “exotic” patterns to your arsenal can help you become a fretboard master.