…and then I go to a C form here. There’s your IV chord,
back to the G. Then your D. That should resolve on your
V chord back to your G. I’m just going to call it by the
shape name rather than — even though we’re in the key of C.
The tabs, again, showing exactly what this is.

But my riffing on that… Sometimes the capo will put you
out of tune. There it is. What I’m utilizing is — here’s
several beautiful parts about the capo. One is — and I’m
illustrated this before — when you’re playing acoustic
guitar, whether it’s country, blues, whatever you’re playing,
sometimes you want to make sure that you can incorporate as
many open strings as possible to get that sound.
It’s just a really great open sound.

You’re not going to get that unless you capo-up. And you
might be changing the sound or the key to fit your voice.
So it’s really important and if you’re backing someone up,
same thing. It might be their range might be E flat. Well,
it’s kind of hard to play acoustic guitar in E flat and get
a big strumming, open strings going. But if you incorporate
the capo there’s many ways you can find an E flat on your
neck and still not lose that open sound. So there’s that
aspect of using a capo.

The second aspect that I like about it is kind of the Nashville
tuning, we call it. You know, the high tune stuff. It gets a real
chimed sound. So that gives that Nashville sound or I like to call
it the Austin sound because I think Austin is the hippest town
going next to Mill Valley. If you’re doing some licks around
that, look, you can use your G position.

So let me just decipher those for you. We’re using basically
an open string move here. One of my favorite country blues,
basically spelling out your — in this case it’s a C chord,
but we’re approaching it like a G. So if we… That sounds
like a fiddle riff, doesn’t it? When you go to your C you
can use your hammer-on technique there. So you’re still in
that C position chord.

So you may be asking yourself what’s this got to do with the blues?
Well, as I mentioned before, country blues is a big part of what
the blues is and what it became, how it evolved. So we’re covering
every aspect of the blues from the ragtime influences to the gut
bucket stuff, the delta stuff, the more shuffley, big city stuff
and, of course, this really sweet country stuff. We’re going to
shortly get into one of my very favorite blues composers, Mississippi
John Hurt and how he did it, his slant on the blues. But back to
these little licks that I want to show you some blues you can use.

If you’re doing this kind of… You can use all those little hammer-on
moves that you saw me do. And then go to your C. Basically spelling-out
the chord. And then when you get to your D chord you can do this cool
little… Almost has a little bit of Appalachian flavor to it, doesn’t it?
Once you hear the Avett Brothers and Mumford & Sons, all those guys.
Not that they’re straight-up blues players. It doesn’t matter.
So those are some cool little licks that you can do there.

What I’m going to do is go ahead and play along with the track
one last time and I’m going to kind of give you a little vocabulary,
a little library of licks that you can do. 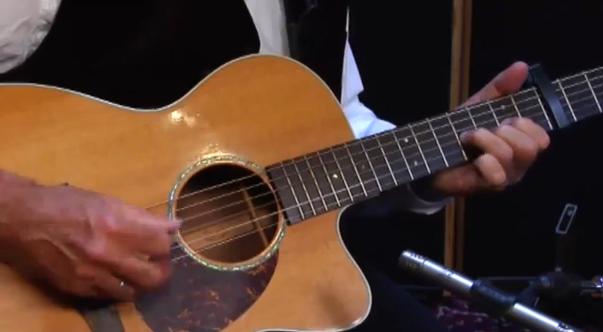