How to Play In My Life By The Beatles

Check out How to Play In My Life – Beatles Guitar Song Lesson from Guitar Control instructor Jon MacLennan. Be sure to click the link to get the free guitar tabs to go alone with the step by step video instruction. 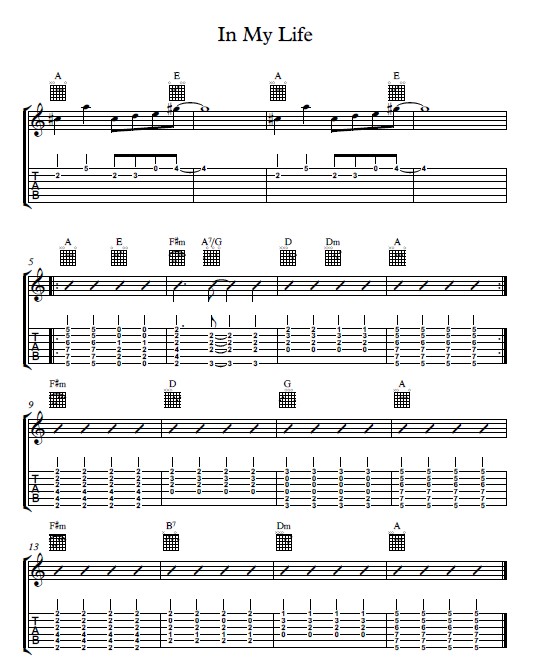 Hey how’s it going? My name is Jon MacLennan and I hope you’re doing fantastic and I’m here with guitarcontrol.com bringing you this video lesson and today’s lesson is on a song called In My Life by The Beatles. It’s a beautiful song and I’m going to show you a way of playing rhythm through the entire song and we’re gonna break it down step by step. We’re gonna look at the intro, the A section and the B section and how to play over the solo and the outro of course. So click the link below so you can get the PDF that goes along with How to Play In My Life By The Beatles video lesson and let’s zoom in and break down How to Play In My Life By The Beatles.

In My Life Intro

For the intro for How to Play In My Life By The Beatles I think there’s two guitars and I think one of them is going like this… and just playing that single note melody… while the second guitar is playing the chords A to E. So I came up with this way of playing them both at the same time and it’s sort of my own take on it. So what you do is you take an A chord and maybe actually I’ll make it an A7 so I’m not necessarily strumming this chord though, I’m just picking putting my pick on the sixth string and then my middle finger on the third string and I’m starting like an A minor and kind of getting a little bluesy flavor with it… so basically again that’s sort of an A7 hammering into the middle note, playing the first string and then doing the rest of the melody; third string adding my pinky to the fifth fret of the third string then the second string fifth fret and then I harmonize that G sharp melody with a sixth and that’s basically you know my third finger in my pinky on seven and seven on the 2nd and 4th strings. So it sounds like this… and I might just play the low E or you know do a little pull-off there on the first string. So that’s how I interpret the intro for How to Play In My Life By The Beatles. Next up is the A section for the verse of How to Play In My Life By The Beatles.

I’m just gonna go through some basic chords for How to Play In My Life By The Beatles here. I’m gonna start out on an A barre chord at the fifth fret and this would be; five, seven, seven, six, five, five… so that’s basically it. It’s just those four bars and then it’s repeated. So I have the A and then I went to an E chord and that’s; zero, two, two, one, zero, zero and then F sharp minor. That’s gonna be two, four, four, two, two, two and then an A7 over G (A7/G) and what I think is on the recording is just the bass note. I think he just goes like… that’s all I think it is, but if you wanted to put a chord you could hold this a note or this a bar here just and then put the G in the bass if you wanted to get that sound and then you go to a D bar chord; five, seven, seven, seven and this is the standard line four chord and then make it mine, it’s kind of a cool little trick there. So that’s five, seven, seven, seven, two, five, seven, seven, six. So basically just for added the third of the chord to make it minor and then you go back to A. So the melody there and what I’m kind of doing on the strumming pattern is really playing a bass note and then kind of slowly dragging my pick over the string, this one and then going back to the bass note. Then maybe I might kind of arpeggiate a little bit and just pick some of the notes to create a little texture in this accompaniment part. So if I put this together; the intro into the A section or the verse or whatever you want to call it, it’ll sound like this… and that leads us into the B section of How to Play In My Life By The Beatles.

Now the next eight bars goes like this… So what’s going on there as I’m playing an f-sharp minor Barre chord, so you know the melody leads us in, so f-sharp minor four, four, two, two; so one whole measure of that one, two, three and then you go to a D chord and that’s five, seven, seven, seven and sometimes I play that with my pinkie or sometimes our third finger, either way and then I go to a G barre chord which is just like the other,  but I’ve dropped it down two frets. So this is gonna be three, five, four, three, three. So back to that f-sharp minor in the measure there and again if you’re having trouble be sure to click the link so you can get the chart that I’m looking at, it’s going through these chords. So yeah you could do it a few ways. Sometimes I play it like this or the bar chord version. This is a nice acoustic version of How to Play In My Life By The Beatles not playing the sixth string and then you lead up to the D minor which would be the same as before; five, seven, seven, six. So the whole bridge or the B section of How to Play In My Life By The Beatles… then we go back to the verse and play everything all over again. So after that second verse and second chorus or the A section and the B section we go into the piano solo and the piano solo is basically the verse with some changes; so I’ll play that for you. Let’s say that we came out of that, in fact it’s the same exact thing as a verse, again there’s just no singing, it’s a solo and then you come out into the B section and then we go for the ending we go to the deep D minor.

Well I hope that helps you get started with the song and for more information you can click on the annotation on your screen or the I card if you’re on mobile and check out one of my courses for guitar control, a lot of great content there. All right well thanks so much. I’m Jon MacLennan and I’ll see you in the next video lesson.