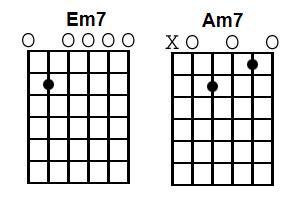 Hey, guys. Claude Johnson here with guitarcontrol.com and
I want to give you some real super-easy, beginner tips to
get started with guitar. In the past I’ve talked a lot
about learning what I call the seven basic chords.
But if those are even too tough I’m just going to give
you a real simple way to get started here.
We’re going to just do two chords.

I hope that made sense. I’d like to invite you to
check-out my beginner guitar course. It’s called the
Ultimate Beginner Guitar Course and you can check
it out at guitarcontrol.com/beginner. It’s an amazing
course because I go over everything you need to know
to get started: chords, strumming, you name it,
everything. And then I also give 75 amazing examples
of learning this killer repertoire of songs just based
on knowing the basic chords and how to put them
together into progressions. I call that the one, two,
three guitar system. Number one, learn the basic chords;
two, put them together into progressions and then three,
you can add a few more things and you’re basically
playing all your favorite songs.

Once again, check it out guitarcontrol.com/beginner.
Thanks for watching. Take care.