How to Play An Eclectic Electric Blues Style On Guitar 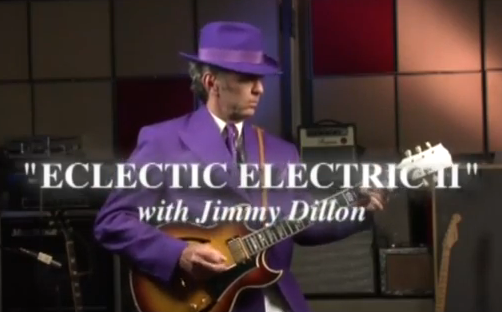 Whether or not you’re a blues purist,
it’s good to know about blues guitar
because every other contemporary music
style (Rock, Jazz, Country, Metal, etc)
all came from the blues.

In today’s video clip, I want to share
with you a sampling from one of the
lessons on Jimmy Dillon’s new course:

It’s going deep in da blues…
Think of this as a tiny taste of what’s
to come in Jimmy’s new course.

It all goes down on December 5th and
we’re gonna have one of the greatest
deals ever for a new product launch.

Well all right, how you doing out there?
We’re back with Eclectic Electric II.
We’ve changed outfits. I’ve got my kind
of over-the-top outfit going here because
we’re going to get really wild and colorful
with it now. We’re going to get big and rock
and kind of loud and we’re going to have a
lot of fun doing this.

Now, when we talk about Eclectic Electric
guitar, we’re talking about bending different
genres and taking them to places that they
don’t normally go. So when you hear a song
like “Crossroads”, if you hear the original
version of “Crossroads”, of course it’s more
like… More of that kind of Robert Johnson
style. But of course, when that got hybridized
in the Fillmore in — was it ’68 I think that
they recorded “Crossroads” live at the Fillmore,
everything changed.

So I want to talk about how you take a regular
blues progression or a blues rock progression
and then you make it big, you make it
really big. One of the ways we do
that — we all recognize that, right?
But if you speed that up and kind of
put a back-beat to it… Or if you
swing it… You have kind of an R&B
or a swinging uptown jive blues,
whatever.

And then I talked about the great
migration, how people moved — three
million people moved up
the delta all the way to
cities like Chicago to work.
And of course, the thing that
happened is, what was originally
kind of spirituals, very light,
kind of lyrical music — and some of
it was gutbucket, too — it got the
heat and the burning and the pace of
the city and people were working,
shucking steel and doing things
they do in the big city in
Detroit, Chicago and New York.
And so the blues got
electrified, guys like
Muddy Waters and Howlin’ Wolf,
Chess Records. All of a sudden you
had stuff like that going on or you
had kind of a… Stuff like that
or Bo Diddley. All that kind
of new music was happening
in Chicago at the time,
just wonderful stuff, Buddy Guy.

But you’ve got to start in the beginning
and understand that the blues was
the first music that was really
indigenous to North America, especially
to the South and how it immigrated to
other cities and how that was affected.
But I just wanted to mention that
because part of the look that we
have here and part of the things
we’re exploring in Eclectic Electric
definitely have the roots in the blues
and then they’ve kind of traveled on
and become all these different
varied — it’s almost like a tree
that grew and all these different
beautiful kinds of music
came out of it.

I can tell you from touring the world
that American music, American Roots
music is incredibly well respected
and embraced and loved all over
the place.