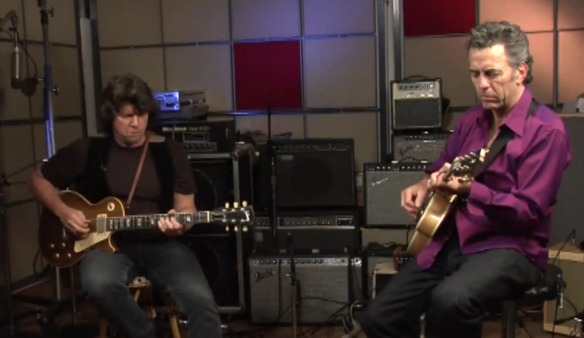 This is sample lesson from Eclectic Electric II, set to be released on December 5.
It’s part of a lesson that Jimmy calls “What’s old is New”… A classic Eric
Clapton tune (Old Love) is decoded and Jimmy shows us not only the chords
but how to spice it up with some Hendrix-style embellishments. To top it all
off, Mark Karan makes a special appearance and shares some uber-tasty lead
vibes. Check it out!

And get ready to hop onboard the Eclectic Electric train! Coming Very soon!

I started out with… Which is one
of those licks that you hear a lot
both in R&B and in some of Jimi Hendrix’s
music. I started with a high A, down to a G
and then I did an A minor form. Now,
what I did do on this
is — the chord changes
I want to show you are A minor.
So I did a little lick coming in.
Cool little lick on the bass.
Starting with a low E and leading up
to a G, an A and a C. So that gets
you into the pattern, which is A
minor and then F and then a G
suss and then back to the lick. Then I did a…

Now, you’ll notice I did that little
climb from the F. I went A minor to F
and then I did — this is definitely
a Hendrix move here, which is… He
was very fond of those hammer-ons.
So basically when you go from your A minor
to your F you can jump up to this position F, here,
do a little hammer-on and then do a chromatic climb.