How to Play Drive My Car By The Beatles 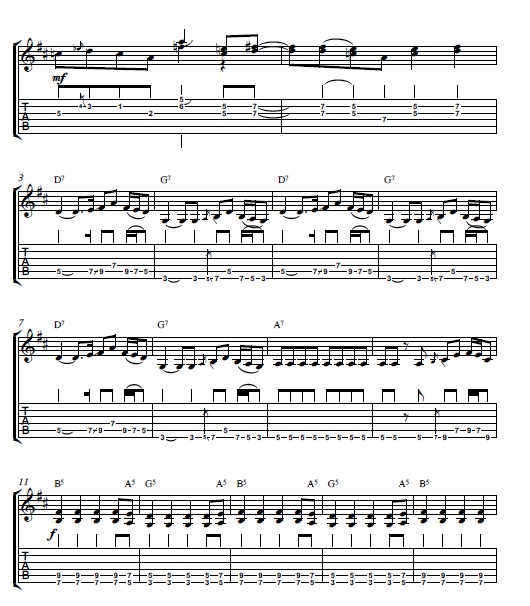 Hey how’s it going? My name is Jon MacLennan and I hope you’re doing fantastic and I’m here with GuitarControl.com today bringing you this video lesson and we’re looking at a song by the Beatles called Drive My Car and it’s got some really cool guitar parts in it. I’m going to break the whole song down for you so be sure to click the link below so you can get the tab that goes along with this lesson. We’re going to zoom in and break down How to Play Drive My Car By The Beatles and here we go.

So for this intro for How to Play Drive My Car By The Beatles we’re basing it really off of a D7 chord and playing a great little bluesy figure here. You’re starting out on the seventh fret of the fourth string and then you drop to your first finger to the fifth fret of the third string and then I reach up to the eighth fret on that same string and play the note and quickly slide back to seventh fret and five and then seven on the fourth string; I guess I’m also doing a pull-off… nice little kind of just slur across the notes. Then we got this cool blues lick here where basically you’re playing five and six, but you’re slightly bending up that six on the second string just to give it a little bit of kind of blues out of tune flavor. Then you take your first finger you barre it across two strings; the second and third strings and you play double stops… and then you do a pull-off from those double stops, seven to five. So the way you do that is you just kind of dig into the notes and pull the string down to pluck luck it… Then you place seven on the fourth string and then five, five, seven, seven. So that second measure is your D chord… Then we go into the verse for How to Play Drive My Car By The Beatles.

The verse for How to Play Drive My Car By The Beatles kind of doubles to me, it’s like a classic Paul McCartney kind of bass line, so the guitar is doing this bass line… So what I’m doing is starting on the note D at the fifth fret and then you play seven and slide up to nine and then put your first finger down seven on the fourth string and then you play nine, seven, five and then you kind of just copy and paste that figure to the note G starting at the third fret sixth string. So literally the same movement, just done on different strings… the only thing is on the G is where he plays the second note twice…  in fact that’s following the chorus… Okay so that’s going to go one, two, three times, so let’s do it together slowly… Then in the last measure you basically go up to this note a at the fifth fret and you play eighth notes; one and two and three and four and one and two and, and that little A chord launches us into the chorus. So just to slow that down, it’s a measure of eighth notes, so I’m going all down strokes here with my pick just going one and two and three and one and one and two and then you slide with your third finger up to the ninth fret on that same string and drop your first finger down seven on the fifth then nine seven nine, so it’s just to reverse the last two measures of the verse. Okay let’s recap; we’re going to play the intro we’re going to go to the verse and play everything we’ve learned, so far here we go one more time… That leads us into the chorus, nice work, so you’ve got that intro and verse down. Let’s move on to the next part of How to Play Drive My Car By The Beatles, the chorus.

So for the chorus part of How to Play Drive My Car By The Beatles we’re utilizing some power chords and we kick up the energy a little bit playing a little harder and we’re digging in. So here’s how you start you put your first finger on the seventh fret and I play power chords with my first finger in my pinky. So it’s a little weird, you know some people do it with the first and third, either is cool you know. So seven nine and you’re going to do four of those and then on the end of four you’re going to move it down two frets, two five seven, which is an A5 power chord and then you walk it down another two frets down. So in fact we’re just kind of moving and of course they call whole steps, which is two frets, and then guess what, back up, so that’s the basic idea here. Okay so we do one, two, three, four, five bars of that sounds like this… Now in the last measure, in that fifth measure you’re just gonna stay on B and then we do this cool little baseline and the band’s going higher. So he’s kind of implying that with the bass notes here so; 0 2 3 0 for the first half and I like to just play these all on down strokes and then you move to the fifth string open and back down to the 6th string 3 to open. So the whole thing is you’re on two three zero then you go to five here and this measure is five, five, seven, five, seven times and then the last measure is five, five, five, seven, five, two, nine, seven, nine, eleven, nine; so let me play the whole chorus for you… and then we’re back to our verse which is… and then our kind of Paul McCartney baseline there for the verse.