How to Play Rock N Roll by Led Zeppelin

Today we are going to talk about how to play Rock N Roll by Led Zeppelin. Led Zeppelin is inarguably gotta be one of the coolest bands of all time. There are very few people that don’t seem to love a Zeppelin classic. They are a total all star band with amazing songs that are just flat out cool. And this certainly does not leave out guitar hero Jimmy Page. There is so much to learn from Jimmy. Not only does he have great rock star chops but he also has incredibly feel and style and not only does he write great solos, but he also writes incredible songs and riffs. Today we are going to focus on the intro and the verse of this song, Rock N Roll.

Step 1: The Chords and The Progression

The first step in learning how to play Rock N Roll by Led Zeppelin is to break down the chords and the progression used in the main riff, which is also the intro. So for the main riff, we actually play this riff on our root, our 4th and our 5th. This is a really common chord progression especially in blues, it means the 1, the 4, and the 5, the degree in the scale, the chord. So we are going to start with A, which is our one and play it open, all of these chords will be played in the open position. To play open A we play an open 5th string which is an “A” note, and then place your pointer on the 2nd fret 4th string. Play both of these notes together and you have an open A5 chord. So only strumming the 5th and 4th strings with your pointer holding down the 4th string 2nd fret.

Then D5, I play this one with the octave in it, which means the same note as the root but a different voicing. I use the octave only when I’m playing the chord part of this song, not during the main riff/faster part. So I make a D major shape, the normal open D you are probably used to. Make a peace sign with your fretting hand, place your pointer down on the 3rd string 2nd fret, your middle finger down on the 1st string 2nd fret and your ring finger down on the 2nd string 3rd fret and strum from the open 4th string down.

To make this chord a power chord, just lift your middle finger up off the fretboard and only strum the 4th string to the 2nd string. So to review the power chord version quickly you now have your pointer on the 3rd string 2nd fret and your ring finger on the 2nd string 3rd fret, and strum from the 4th string down. Your ring finger is the finger that is holding down the octave note, so this finger is the one that is optional and that you will not be holding down when you are playing the faster main riff. So the open D note and the 5th of the scale, your pointer finger note on the 3rd string 2nd fret, always going to have that, but the octave helps fill it out if you are strumming.

For the open E5 we have an open 6th string which is the E note and I place my pointer on the 2nd fret 5th string. Then just strum those two notes together, the 6th and 5th strings. So our root, A5, our 4th, D5, and our 5th, E5. So this riff will be played on the same frets but different strings depending on which chords we are basing the riff around. Most of it is around our open A5, but of course, it is also played around the D5 and E5. If you are enjoying playing this style of blues chords be sure to check out Robert’s southern swing Lynyrd Skynyrd lesson.

The main riff is played in 3 different positions revolving around the chord. I will show it to you in A5, our main positions and then re-go over it with the other strings but it is the same riff. If you learn it once you can just move it around on these different chord shapes and you will know it in all of them by just learning it from the first position.

First in our open A position we start with the open A5 chord, play the open 5th string with your pointer finger holding down the 2nd fret 4th string, strum just those two notes. So for the first time, we strum it once but every single other time we play this riff, even on the D5 and the E5, we play the chord twice in the beginning, but for this one time, the very first time played, we play it once. Then take your third finger and put it on the 4th str 5th string and pick it once, just the single note, and go back to the open A5 chord. Then bring your pinky down on the 5th fret 4th string and you are going to strum both the 5th and 4th strings together, so the open 5th string with your pinky holding down the 5th fret 4th string. Then pick just the 4th string 2nd fret, holding it down with your pointer finger. Then bring your third finger down on the 4th fret 4th string, I strum again the 4th and 5yh string together, then I bend one half step the 5th string 3rd fret, into this little open blues riff.

You have probably heard this kind of riff a million times, the classic blues power chord alternating between the 5th of the scale and the 6th by replacing the note your ring finger holds down, the 5th of the scale, with your pinky holding down the 6th of the scale on the same string but two frets down. Since this is in the open position it is actually much easier to play since you are not using your pointer to hold down the root note because it is taken care of with the open string.

So switching between the 5th and 6th scale egress in our open A5 position means holding down the normal open A5 when you are playing the 5th and holding down the 4th string 4th fret with your ring finger when you want to hear the 6th degree. This is a very common in blues music, I am going to just say the fret number that our fingers are switching between to make it easier to follow. So I will say 2 which I am playing the open A5 with my pointer finger on the 2nd fret 4th string, and I will say 4 when I am changing to the 4th string 4th fret with my ring finger. So remember this part has an open 5th string the whole time, we are only changing between the 2nd and 4th frets on the 4th string. So 2, 4 4 4, 2, 4, 2. One time, three times, one time, one time, one time. One time on 2, three times on 4, one time on 2, one time on 4, one last time on 2.

Now put down of these riffs together! When repeating the riff though change the very first part to play the open chord you start with two times, and do this every time this riff is played from now on, always playing the first chord twice with the exception of the very first time it is played in this song, only.

Now in the open D5 position. I move my pointer down just one string. I now have an open 4th string and am holding down the 5th of this D5 chord with my pointer on the 3rd string 2nd fret. Strum it twice. Then place your ring finger down on the 4th fret 4th string and pick it once, 4th string only. Back to the open D5 once and then drop your pinky down to the 5th fret 3rd string, strumming both the 4th and 3rd strings together, then pick just the 2nd fret 3rd string holding the note down with your pointer. Then drop your ring finger to the 3rd string 4th fret, pick the 4th and 3rd strings together and then bend down the 4th fret 3rd string into the blues rhythm we were just talking about. Switching between the 2nd and 4th frets on the 3td string and manning that open 4th string the whole time. 2, 4 4 4, 2, 4, 2. Then back to the A5 position through this riff all the way through again, but just once. And then to the E5 position.

Next we do this same thing but with the D5 chord. I use the D5 I showed earlier with the octave added in. So your pointer on the 3rd string 2nd fret, and your ring finger on the 2nd string 3rd fret strumming from the 4th string to the 2nd. Then I use my middle finger to do the pull off on the 5th string 3rd fret to pull off to that D5. So this one does the same thing, pull off on the 3rd fret to the D5 chord twice and then pull off to the open 5th string, which is an A note, once. At 9:35 I will show you how to switch between these two chords with the fill.

So this progression is played by the 6th string 3rd fret pull off happening once to the chord 3 times and then the fourth time this faster fill which it does the pull off twice and then pulls off to the open 6th string. Same when we switch to the open D5. So go through the entire progression on A twice, then switch to D5 and only do it once, back to A5 once.

Recap: How to Play Rock N Roll by Led Zeppelin

I hope you enjoyed learning how to play Rock N Roll by Led Zeppelin! This song is so fun and has a ton of important elements especially for that blues-rock guitar style. It is very cool to play that blues rhythm style in both the open position and not. Remember to play these parts slowly first and really understand the rhythmic elements he is using. Also remember to especially slow down that first part and realize it is the same part played in three different places focusing on three different chords but they are all open so it’s really just moving down and up strings, and of course, as always, have fun! 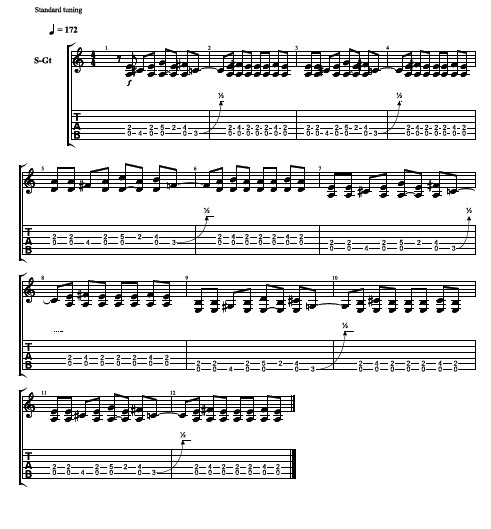 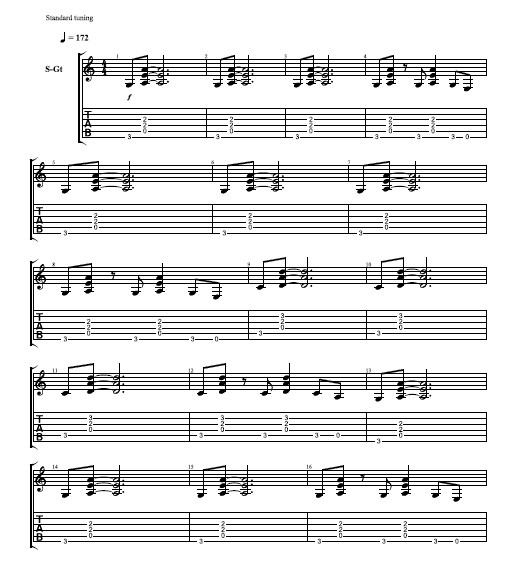