The Blues Scale Guitar is a musical form that almost every guitar player is familiar with whether he knows it or not. The blues has been around since at least the end of the 19th century and has been used in every genre of music from blues to rock to country. Regardless of the musical style, there is one single scale responsible for the sound we recognize as the blues. That scale is the blues scale. Blues scale guitar playing is largely an improvisational style of playing based on the scale we know as the blues. Let’s take a look at the C major scale. The notes of the scale are C-D-E-F-G-A-B. By making some minor adjustments to this scale we can come up with a blues scale. Let’s get rid of the second note, flat the third, flat the fifth, omit the sixth, and flat the seventh. This leaves us with C-Eb-F-Gb-G-Bb—the blues scale. Another way to conceive this scale is to start with a minor pentatonic and add a flatted fifth. The end result is the same, a blues scale.

Play the example below and listen to the blue note on the 11th frets, then play the same lick and replace the those notes with the natural notes of the major scale. You’ll quickly hear the difference the “blue” note makes. 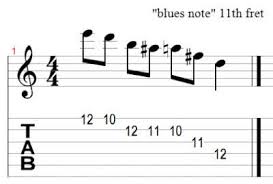 Blues scale guitar playing encompasses not only the use of the scales found in the blues scale, but the techniques closely associated with blues playing. These techniques include slow bends, trilling (making a note vibrate a la B.B. King) and sliding from one note to the next. Look at the blues scale plotted on the fretboard here and play through these positions in consecutive order. Once you’ve familiarized yourself with the pattern, try improvising some licks using notes in different positions using some of the techniques I’ve described above. Close your eyes and “feel” what you’re playing. To help you out I’ve included a blues piece in C in TAB and standard notation that incorporates string bends, double stops (another blues favorite), and plenty of hammer-ons and pull-offs (also used frequently in blues playing). By combining the techniques with the blues scale and playing with “emotion,” you’ll be able to play the blues whether you’ve lived a hard life or not. 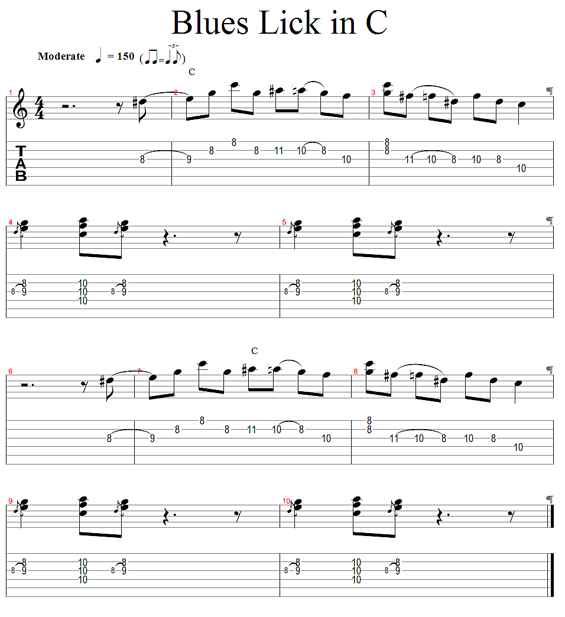 How to Play A Major Pentatonic Lick on Blues Guitar

How to Play The Jazz Chord Lick in G Major

How to Play Major 7th Chords on Guitar

How to Play On Bb Major Scale Shapes On Lead Guitar

All You Need To Know About C Major Guitar Scale

How to Play G Major Scale