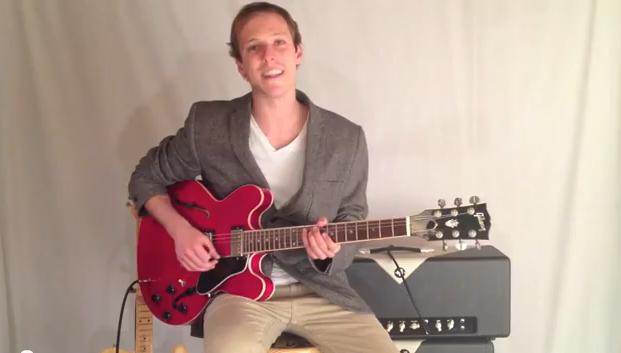 Hi, my name is John McClennan and I’m here today
with Guitar Control and I’m excited to bring you
this video. I hope you guys are doing fantastic.

Let’s take a look at this lick. It’s slightly
jazzy and it uses something that is called the
bebop scale. Basically I think of this as being
applied over a D7 or D9 resolving to a G major 7.
So you have like, say, this chord, which I’ll just
explain those two chords real quick. I’m on the
10th fret, 9th, 7th and 10th for the D9 with a root
right here on the high string. And then resolving
that to a G major 7, which the frets on this are
10, 9, 7, 7.

The lick starts right off that five-chord, the
D7 resolving to the G major 7 and it just comes
down chromatically. Chromatically means in half
steps. Already it just kind of has a jazzy sound
to it. Here it is really slow.

What’s happening at the end here is basically what
I think of as an enclosure. So if you think of a
chord, like the chord shape that I just showed you,
G major 7, and you have this third finger here,
which is a B natural, this note, and that is the
third of a G major 7 chord.

So what I’m doing is I’m playing above that note
then below and then finally resolving. So it’s a
sound that you hear in bebop jazz, that kind of
thing, all the time. Again, it’s dipping into
the language. So when you play things like that
you sound legit right away.

Be sure to check the links below for the tabs
and we’ll catch you in the next video. Thanks.