Hey, how’s it going this is Darrin Goodman with Guitar Control, I want to show you a little sequence from Yngwie Malmsteen song “I’ll see the light tonight”.

A little part that he like harmonizes with the keyboards right before the guitar solo and stuff but this is a really good exercise for alternate picking and for working out your fretting hand as well you know moving around through these positions and stuff and he plays this like really fast but you know I’m not even going to attempt to do that it doesn’t really matter you know I mean if you work it up and you play really fast that’s great but it doesn’t have to be played fast to be you beneficial and pretty cool sounding. 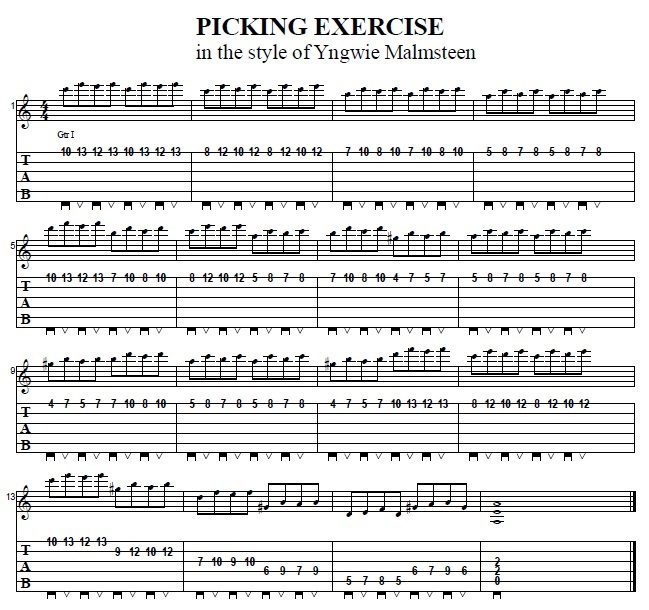 Like I said this is all alternate picking so that means no two down strokes in a row no two up strokes in a row just down, up, down, up, down, up. For the first position most of this is on the first string by the way on the 10th fret of the 1st string with your first finger and then the other two notes from the 12th fret with your third finger and the 13th fret with your fourth finger now you could do this you know 1st, 2nd the 3rd or recommend if you’re a beginner you really get used to using your pinky it just really makes a big difference on a lot of stuff you know if I’m playing up really high above the 12th fret a lot of times I won’t use my pinky just because the frets are closer together and you know things can tend to get a little cramped but for you know anything below that it’s the opposite if you’re trying to go you know make these big stretches you know between your first and second and your third finger it’s that can be a little awkward too so I really recommend that you do it this way. We’ve got 10 and then we go to 13 and then 12 and then back to 13 so each one of these things if you think of it it’s three notes so 1, 2, 3, the pattern is 1, 3, 2, 3, so for this first section we’re going to shape and we’re going to play it twice.

Now we just move down into the next position so notes 1 and 2 become notes 2 & 3 so now we’re going to move our fourth finger from the 13th fret to the 12th and now our second finger on the 10th and our first finger on the 8th. Now this is how I like to do it some people like to do this they you know they like to make the stretch there that it’s just not comfortable for me to do that if you have longer fingers then this might be the way to go I’ve just kind of noticed that the players who are blessed with those you know awesome guitar player hands which I am NOT you know players like Paul Gilbert or Ebay or Steve Vai you know they all have you know really long fingers and I’ll notice that they tend to do those shapes that way so remember first shape now our second shape so now we’re going to be 8, 12 and we move down into the next position again so our first finger goes to seven fourth finger goes to ten and second finger is at 8 and then we move down again so now we’re 5, 7, and 8, so this whole first part.

I hope you enjoyed that and you got something out of it if you liked the video give me a thumbs up leave a comment down below if there’s something you’d like to see either myself or one of the other instructors at guitarcontrol.com do in a future lesson so like I said aside from this just being you know kind of a cool sounding riff and stuff it’s a great workout for both of your hands one you’re working with alternate picking and it’s like an endurance thing just to keep going and then with your fretting hand it’s you’re basically getting exercise for all four fingers and you’re having to move through these positions and stuff so it just kind of helps you to like visualize places to go on the on the fret board all right so that’s all I’ve got for you today.

How to Play Tapping Licks on Guitar