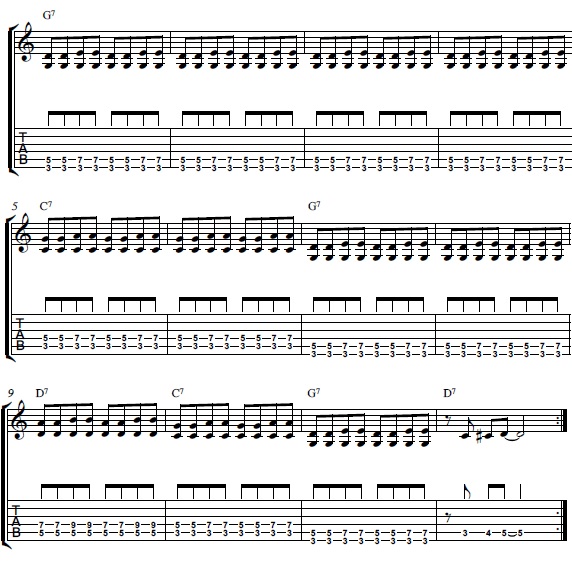 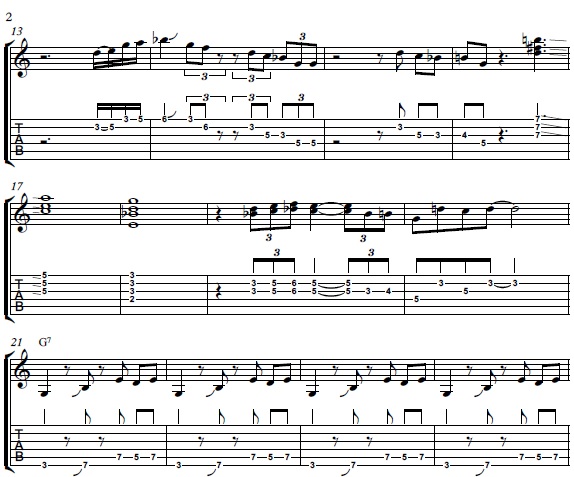 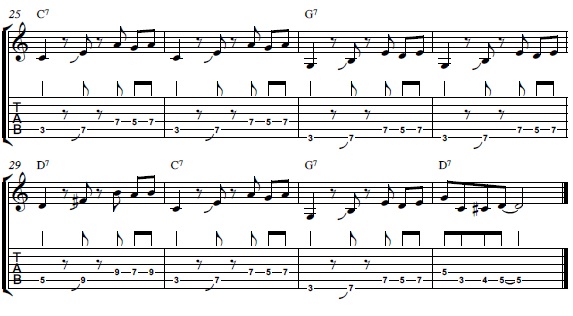 First step is going to be arranging this piano part for guitar and understanding the rhythm. Start with your pointer finger on the 6th string 3rd fret. Then put your third finger on the 5th string 5th fret, play this two notes together making up a G5 chord. We’re going to play this chord twice, both down strokes. Then we are going to put our pinky on the 7th fret 5th string, you’re going to reach out and grab that note.

Now, you don’t need to push down the 5th fret 5th string while you play the pinky note, but you want to keep it down since you’ll return to it, and that way you are ready to go back, right after you play the 7th fret 5th string, playing this blues shuffle rhythm. Bouncing back and forth between these two shapes, picking each of them twice before going to the next. You’re going to do four bars of this. Then you are going to play the same exact rhythm pattern, but down one string, so moving your first finger to the 5th string now 3rd fret which is a C, you are now making a C5 chord. Your third finger is now on the 4th string 5th fret, and you want to play these two strings together two times, then reach out with your pinky to the 4th string 7th fret and play those two strings together two times. Now, go back and forth doing the same blues shuffle you were doing on the other chords and then back to G, the first chord we did.

So far for the first 8 bars of the blues we have G5 for 4 bars to C5 for 2, and then back to G for 2. For the final 4 bars, also sometimes called the turnaround, you are going to walk up, taking that C chord and moving it up two frets to the 5th fret, so now making a D chord. Pointer on the 5th fret 5th string and now shuffling between the 4th string 7th fret with your ring finger and the 4th string 9th fret with your pinky, this only lasts for one measure.

Then we’re going to walk down to our C for one measure and then return to our first chord, the G for one measure. Then sometimes Jon plays a short chromatic line as a turn around and this is just a blues cliche. He starts with his first finger on the 5th string 3rd fret, then middle on the 5th string 4th, and ring finger on the 5th string 5th fret. Rhythmically starting after beat 1, on the and of 1, on beat 2, and beat 2. At 4:50 Jon will play through the entire thing so far. If you are enjoying this blues shuffle rhythm, be sure to check out John’s lesson on how to play Stormy Monday for another great blues song!

Now, let’s take a look at the lead playing! There is some really nice lead playing on the intro to this tune. Starting with the 4 chord. So after you’ve now played through the tune for four bars and you go to that C. On beat 4 of that C you are going to start the lead. To play that lead, place your first finger on the 2nd string and hammer on from the 3rd fret to the 5th, using your pointer to ring fingers. Then hammer on the 1st and on the 3rd to 5th frets on the 1st string. Then slide up one fret and bend the 6th fret. It’s just a slight lift, a blues bend.

For the third measure of this solo, where the rhythm guitar returns back to a G chord. The phrase comes in on the and of beat 4. This part is noodling around a G triad. He starts by playing the 5th of the chord with his pointer finger on the 3rd fret 2nd string, then goes one half step above the major 3rd, then one below it and then to it. So all the 3rd string 5th fret with your ring finger, to the 3rd fret 3rd string with your pointer, ending on the major 3rd which is the 4th fret 3rd string, and you will be using your middle finger. Jon refers to licks like this as an enclosure, because you have your target note, but you are playing on either side of it before you go to it, encircling it. Then drop down to the root with your third finger on the 4th string 5th fret. At about 9:56 Jon will play everything we have done so far.

Then we follow with a cool blues rhythm pattern, this pattern comes from dominant 9th chords. This style lick reminds Jon of players like T Bone Walker that play these kind of licks all the time. So barring the 7th fret from the 3rd string down with your pointer and sliding it down to the 5th fret, keeping the pressure down on all of those strings. Just barring and sliding down a whole step. This is at the turnaround, now to the C9.

This is a cool kind of rootless voicing, its a C9 but the guitar plays the 4th string down, not including the middle finger holding down the C on the 5th string 3rd fret that we usually do for this chord. Still holding down the 2nd fret 4th string with your pointer finger and barring the 3rd fret from the 3rd string down with your pointer, and strumming from the 4th string down. Again, when you play in a band situation, you don’t need to always play the roots of all the chords. You can instead play the hip, cool notes, really turning up the colorful notes of the chords, and letting the bass player play the roots. See Jon putt this all together at 11:21.

Now, for the last little part! Use your first finger to play some double stops, these are thirds, starting barring the 3rd fret on the 3rd and 2nd strings, with your pointer finger, BB and D are these notes. Moving this barre chord on the same strings from the 3rd fret, to the 5th, to the 6th, back to the 5th, you don’t have to use the same finger the whole time but you are using the same strings. It might be a little more rock to barre these strings, if you want you can also use multiple fingers to hold down the different strings, Jon mixes it up a little bit when he plays it. After playing it back to back though he recommends you to barre it, liking the way it sounds a bit more that way.

Step 3: Playing a Bassline on the Guitar

This last part demonstrates playing a bass line on the guitar. This sounds really cool in a blues setting. A really cool thing where basically the concept is that you’re creating a bass line off of the chords. So the first 4 bars of this song the guitar is just playing a G7 which we learned when we covered the rhythm part before.

What the bass guitar does is it plays the root, the 6th string 3rd fret, then you slide into the 7th fret on the 6th string, you can use your third finger, Jon uses his pinky, whatever you prefer. Then you go right underneath to the 5th string, picking the 5th fret to the 7th, back to the 5th. Follow along with Jon at the 14:20 minute mark.

Make sure you understand and master the rhythm of this bass line, that’s what really makes this part. Do this for 4 bars. Then you are going to play the same exact frets, but move everything down one string. So you start on the 3rd fret 5th string, then slide into the 7th fret 5th string, drop down to the 4th string and play the 5th to 7th frets, back to the 5th fret. So the fret numbers, rhythm, and finger numbers stay the same, but the string numbers change. Then back to the one chord, moving everything back to G, back up a string, and playing this again the original way we learned it. That is the first 8 bars, play along at the 15 minute mark.

The last 4 bars start with your first finger on the 6th string 5th fret, then slide on the 5th string to the 9th fret, and on the 4th string picking the 9th fret, to the 7th, back to the 9th. So same thing as the other lines , just based around a different chord, and played on different frets. Then go back down to the 3rd fret 6th string playing this around the G, the first position we learned this in. Adding a little variation on the end adding a turnaround lick just like we did in the rhythm section earlier. The variation starts on the 4th string 5th fret with your pointer finger, then go to the 5th string and chromatically play the 3rd fret, to the 4th, to the 5th, just like what we did in the rhythm section. Play the last 4 bars along with John at the 16 minute mark. Then start it all over!

Recap: How Many More Years by Howlin Wolf

I hope you enjoyed Jon’s lesson on how to play “How Many More Years” by Howlin Wolf. This lesson is jam packed with tons of awesome tips and amazing, tasty blues licks by none other than the great, Howlin Wolf. Remember these song lessons from the pro’s aren’t only a lesson to learn a song but to study what separates these guitarists from the rest, and to understand why they stick out and bring the special elements of their playing into your own. Also, use it as inspiration to find your own voice on the guitar and create your own unique sounds

How to Play Tapping Licks on Guitar