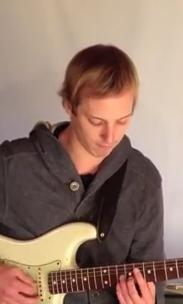 How’s it going, guys? This is John McClennan
and I’m here with guitarcontrol.wpmudev.host, bringing
you this video lesson. We’re looking at the first
four bars of changes to John Coletrane’s “Giant Steps”.

Play these chords and practice them over the tune.
It’s pretty fast. You can play it slow. Slow your
metronome down. Just go one, two, three, four;
one, two, three, four. Just work on getting a clean
sound. Remember, all these chords are going to be
great for applying in any other jazz tune as well,
all these voicings that I’m showing you. So just
simple things like playing a II-V-I, you can play
that like in “Autumn Leaves” or something like that,
a jazz standard, very useful stuff. So this song
is so beneficial in a ton of ways.

Click the link below for the tab
and we’ll catch you in the next video.