How to Play You Shook Me All Night Long Intro

How to Play You Shook Me All Night Long Intro

Learn to Play ACDC You Shook Me All Night Chords in this Guitar Control Lesson. Guitar Control Instructor, John Maclennan is going to show you the intro to this iconic song. This lesson will be more of a rhythm guitar lesson in the style of Angus Young. In this lesson John is going to break down how he modifies these standard kinds of cowboy/open chords that are more typically played on acoustic guitar and adapting them to giving off more of a rock feel. AC/DC is amazing at taking chords that aren’t usually thought of as chords that would be heavy or be used in a rock song, and writing the heaviest most rocking songs ever.

To Learn to Play ACDC You Shook Me All Night Chords, remember that we are going to be taking chords that are typically played open and referred to as cowboy chords or acoustic guitar chords and playing them in a heavy rock riff. So right away you will notice a few things John did to change these open chords a little bit. First on the open G chord which is usually played with your middle finger on the 6th string 3rd fret, your pointer on the 5th string 2nd fret. The higher part of this chord can be played two ways because the 2nd string open is a B note and then 3rd fret 2nd string is a D note and both of these notes are in the G major chord. So you have the option of leaving the 2nd string open and only placing one more finger down to complete this chord, which would be your ring finger on the 3rd fret 1st string, or you can place your ring finger on the 3rd fret 2nd string and your pinky right under it on the 3rd fret 1st string, strumming all the way down from the 6th string through the 1st, this is the way John is playing it in today’s lesson. John alters this open G major for this riff by leaving off the pointer finger, so not including that note, the 5th string 2nd fret and actually not including the 5th string at all. He mutes it by arching over his 2nd finger to just touch the 5th string just enough to mute it. Someone who may have just learned G will play this chord on a clean setting but when you have distortion on it, you’ll notice it doesn’t quite sound as punchy as it does when you leave the pointer finger out and mute the 5th string. John prefers to play the G in this song like that, and then all he does for the next chord, is move his middle finger from the 6th string 3rd fret to the 5th string 3rd fret to pay the C. He leaves all of his other fingers where they were, the ring finger on the 3rd fret 2nd string and the pinky right under it on the 3rd fret 1st string, strumming from the 5th string all the way down through the 1st string. John uses his thumb to mute the 6th string buy wrapping it over and just barely touching the 6th string. This deadens the note and mutes it which means you can strum all six strings but you won’t hear the 6th string because you are muting it, and in this case that is exactly what you want. So you are not limiting your strum hand to only strum from the 5th string down to avoid the 6th string ringing out, no need to since you are muting it. Now that we know these two chords let’s talk about how we strum them. The beginning of this riff just alternates between these two chords. Starting with one strum on the G, then two on the C, back to the G for one strum, to the C for one strum, and then back to the G for one strum. If you are enjoying learning this awesome AC/DC song, make sure to also check out our lesson on how to play Hells Bells by AC/DC. Now we are going to change from that last G to a quick D. Same thing with this D, instead of playing a normal open D major chord, the way you would on an acoustic guitar with an open 4th string, your pointer finger on the 2nd fret 3rd string, your middle finger on the 3rd fret 2nd string, and your ring finger on the 2nd fret 1st string. For this D you are going to alter it by leaving out the 1st string, so not bothering to place your ring down for this one. By leaving out that third finger this D major now becomes an open D5 power chord. A much more rock sounding chord than the D major. So what you will notice is John has removed all of the 3rd from these chords. 3rds are what define chords and make them major or minor. Power chords are just a root and a 5th and don’t give off as distinct as a sound as major, which sounds generally happy, and minor which typically sounds sad. The other benefit to playing power chords is that as a lead guitarist you have more choices since you are not bound to either major or minor chords. At about 2:20 John is going to play through what we have so far.

Another thing you will notice is that Johns strumming hand is doing all down strokes and he is also dampening, or muting in between hits to give a much clearer, sharper sound. He is not letting the strings all ring out. To mute his strumming hand is coming down and muting all the stirngs while his fretting hand is also covering all of the strings and he is releasing all of the pressure he was using to hold down the chords. He still is making the chord shape with his hand so he is ready to use it when he needs it but he is no longer pushing it down into the fretboard, he just lightened up his touch a little bit. So he is actually dampening with both hands to get the best mute. Jusing both hands gives a really clean sound.

Recap: How to Play You Shook Me All Night Long Intro

To Learn to Play ACDC You Shook Me All Night Chords is easier than you thought, I’m sure! I hope you enjoyed John’s lesson explaining how to take this typically open acoustic chords and slightly alter them to play this heavy, iconic AC/DC song. Like I said, AC/DC is the master of this. Who would’ve thought that one of the heaviest most rock n roll bands of all time, literally the band that is the definition of rock n roll would be using open major chords.

One of my teachers used to tell me if I couldn’t make him turn his head by playing an AC/DC riff then he didn’t care what else I could do. I always thought that was a cool lesson because they are the masters of playing simple things with an incredible about of style, rhythm and feel. So try to take that challenge and do that yourself and of course, as always, have fun! 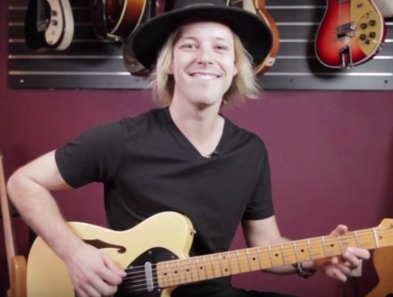 The Power Of Power Chords – The Ultimate Guitar Chord Lesson

How to Play Sweet Caroline by Neil Diamond | Tabs and Video

How to Play Behind Blue Eyes | Easy Blues Guitar Song