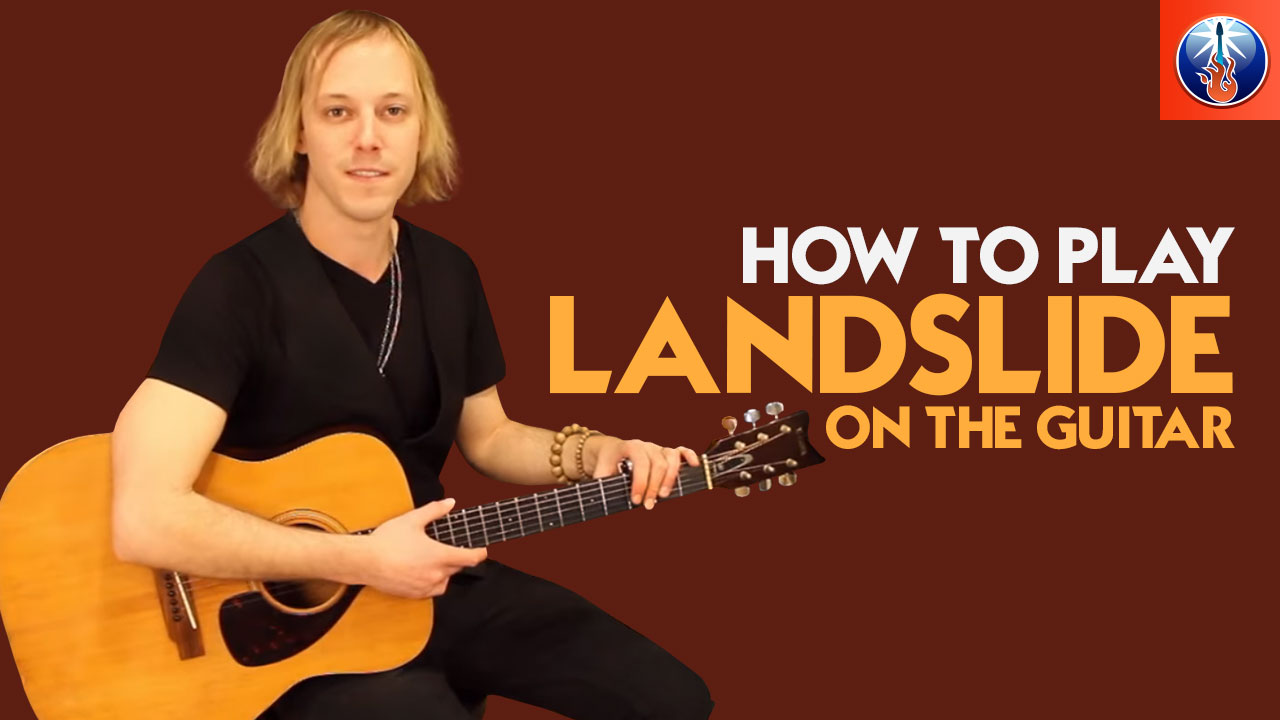 How to Play Landslide On The Guitar

In this Guitar Control video lesson, Instructor, John Maclennan is going to show you how to play Landslide on the guitar. This song is a little fingerstyle 101. And what better song to learn how to fingerpick on?! This is a beautiful song, with an amazing guitar part. In this lesson John is using a capo on the 3rd fret. If you aren’t familiar with capos, a capo acts as your finger does with a barre chord. It “bars” or holds down the strings for you, keeping the pressure down. It’s a very popular songwriters tool because it allows you to play much more complicated chords, easily. Instead of having to bar and maybe not even having enough fingers to do that and play the rest of the chord, the capo allows you to just play open chords while it holds down all six strings for you, wherever you want. So remember for this song, capo on the 3rd fret. If you don’t have a capo and still want to play this song, you definitely can. Just play the same chords but in the open position, the only thing this will do is bother you if you try to play along with the recording or try and sing it in the original key, otherwise it should be no big deal! And if it sounds off, at least you know why! So capo on the 3rd fret.

The first couple of things you will notice when you sit down to learn how to play Landslide on the guitar, are of course the capo on the 3rd fret and that we are starting with a C chord. To play a C major chord in the open position, take your ring finger and place it on the 5th string 3rd fret, then place your middle finger on the 4th string 2nd fret, and your pointer finger on the 2nd string 1st fret. Strum this chord from the 5th string down all the way through to the 1st string. Then you are going to walk down to a G over B, also written like this, G/B. A G/B means you have a G chord, but a B note in the bass. Meaning it’s the lowest note, which typically is the root. Sometimes guitar players don’t even play the bass note, a bass guitar would, but in this case we are, if you were just sight reading a chart with a band of trained musicians and you left it out, that wouldn’t be crazy. It is normal for the guitar player to think the bass is playing it so they can do something else, or just play the chord as is. To play the G/B place your second finger on the 5th string 2nd fret, open 4th string, open 3rd string, and then your pinky finger is holding down the 3rd fret 2nd string, and just strum those inner four strings, strumming from the 5th string all the way down to the 2nd string. Changing from an open C major chord to a G/B. It’s important that you use your second finger and pinky to grab that G/B, do not use your first and third fingers to play it. Using the fingers John told you to make for a smooth transition when coming from the C. If you are enjoying using the capo in this song be sure to check out our other lesson for how to play Folsom Prison Blues by Johnny Cash for another great capo song.

After the G/B you are going to move to an A Minor 7. This chord is really simple and you’ve kind of already done it without even knowing. Make a C chord, the first chord we did in this lesson, and then just simply remove your ring finger, and now you have an A Minor 7 chord. So open 5th string, middle finger on the 4th string 2nd fret, open 3rd string and pointer finger on the 2nd string 1st fret. Then strum from the 5th string to the 2nd string. Now back up to the G/B chord we just did. You might want to start out with just practicing these chord shapes and practice moving them in time. Each chord gets two beats, so just practicing moving these as single strum half notes. C, to G/B, to A Minor 7, back to G/B. John is playing this without a pick, but you can use one if you’d like and play this hybrid style, he’s not using one right now just because he just prefers the warmer sound he gets using his fingers to strum than the harsher sound a pick can give, just for the vibe of this song. Using your fingers can give a warmer sound.

The fingerpicking pattern is played with your thumb, your index finger, and your middle finger. Going thumb, index, back to thumb, then to middle, then back to your thumb, back to your index, and end with your thumb, then repeat! So really, John is just using three chords here and keeping the pattern consistent and moving it through the chords. At the 2:57 minute mark, John is going to walk you through this fingerpicking pattern with the chord changes very slow. Go ahead and go to this spot in the video to try and play along with him or to study how he does this a little closer.

Recap: How to Play Landslide On The Guitar

I hope you enjoyed learning how to play Landslide on the guitar. Be sure to take it slow and make sure that you are doing that fingerpicking pattern in the right order, thats very imporatant. Go slow and get the fingers right, making sure you know that pattern before rushing to play it. This song is absolutely beautiful with and without words, so really enjoy this part as its a very calming and fun piece to play and a very emotional song, even just the guitar part on its own. Remmeber to really get those chords down first, in time, before adding in the fingerpicking. So take this song step by step and even bring some of these fingerpicking patterns and chord voicings into your own songs and playing style. And of course, as always have fun!