Hey, how’s it going this is Claude Johnson with Guitar Control, I will give you a real quick video with some reggae strums so today’s lesson is really a simple reggae kind of thing. 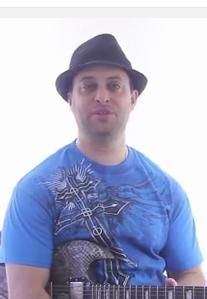 It’s basically like playing the 1 or the 2 of the 4 so 1, 2, 3, 4, 1, 2, 3, 4 speed it up a little bit 1, 2, 3, 4, notice I’m sometimes doing the like the one similar so you can do it up stroke, down stroke. Usually I’m doing a down stroke and I’ll show you the chords in just a sec. I want to make sure you have that basic rhythm 1, 2, 3, 4, I can also kind of tap on one that little percussive sound, so I’m basically just played A to G, you could pick any two major chords that are step apart or you can use your own chord progression that is cool.

So we slide attend to G to F partial barre chords up show you hey actually ring finger on the 7th fret D- string middle finger of a 6th fret G-string first finger of the top two strokes so it’s really seen as this barre chord but it’s easier to finger and it sounds cooler to you’re not in why don’t lay it up with those low notes it’s just when you’re playing reggae you know the bass guitar would be loud it’s going to be your face already so you don’t really need to add more low end just even play the top three strings if you want so this is a real basic simple rhythm we have another reggae teacher who is really the real deal I’m just kind of show you some basic stuff but Steve Gold is actually played with Bob Marley, Peter Tosh so check out his stuff for the real authentic reggae roots vibe go to guitar control.com slash reggae. Make sure to subscribe on our You Tube Channel and we’ll see you in our next video lessons, thanks for watching.

How to Play Guitar Chords Using the Tapping Technique

Do you need Mary Jane to play reggae?