How To Play Immigrant Song on Guitar

Step 1: Breaking Down The Rhythm

So step one to learning how to pay Immigrant Song on guitar is learning that rhythm. This song is pretty fast, and is based on mostly 16th notes. Since this rhythm is so fast, it will also help to practice this entire riff slow. It will help a lot to really get the riff down and then speed it up. Always know how to play something slow if you want to play it fast, it’s the best way to increase speed.

This rhythm is actually just two beats long, so to complete one measure we do it twice. So the 1st beat we do one 8th note and then two 16th notes. When counting 16th notes, every one beat fits four 16th notes, so it’s common to count each beat like this, 1-e-&-a, 2-e-&-a, 3-e-&-a, 4-e-&a. So the number is the down beat and then we add in the e, &, and a to break the beat up without saying more numbers. But the 1 represents the 1st 16th note, the E the 2nd, the & the third, and the A the 4th. So when we say we have an 8th note and then two 16th that means the 8th note is played on the 1 and holds over the E, since 8th note gets half a beat, then our two 16th notes come in on the &, and the A. So if you were clapping this rhythm those are the beats you would clap on. So I did say that this entire rhythm is played over two beats, and all of that just covers beat one. When we put this into 4/4 we will play this same rhythm on beats one and three, but there is a different rhythm on beats two and four.

Beat two starts with a 16th note, than an 8th note, and then ends with another 16th note. This rhythm will happen on both the 2nd and 4th beats in a measure of 4/4. So for this one we would clap, or play, on beat two, and play on the E, this is the 8th note so it actually holds over the & as well. So you attack on E and hold over & and then the last 16th note is played on the A. Then if we mix them, we have beat one, we attack on the 1, the & and the A and on beat two we attack on the 2, the E, and the A. Then we repeat all of this. So beat three is the same as beat one, and beat two is the same as beat 4. If you are enjoying learning this Zeppelin classic, be sure to also check out our lesson for how to play Lemon Song by Led Zeppelin.

Step 2: Applying the Notes and Going Over String Skipping

Now let’s go over what string skipping is and apply some notes to that rhythm! String skipping is exactly what it sounds like. It’s skipping over a string. In this specific riff we are alternating between two notes. The 6th string 2nd fret with our pointer and the 4th string 4th fret with our ring finger. So we go frets 2, 2, 2, 4, 2, 2. And the picking directions are down, down, up, down, up, up pause for a second and one more up. This is our picking direction.

The string skipping is when move from the 2nd fret to the 4th fret and skip over the 5th string to pick only the 6th and 4th strings. When we pick this riff we don’t alternate pick like we usually do. There’s an uneven mixture of ups and downs. But we do do something called inside picking. We start with a two downs and on up and then when we switch to the 4th fret and come back to the 2nd, that is when we use inside picking. Inside picking is when we pick the inside of the strings. So exactly when it sounds like. In this case that mean a down stroke on the 4th fret 4th string so picking down on the 4th and an up on the 2nd fret 4th string. We are picking inside the shape. Outside picking is the opposite. We would pick the outsides of both of the strings.

Recap: How to Play Immigrant Song on Guitar

I hope you enjoyed learning how to play “The Immigrant Song” on guitar! Remember to really slow down that rhythm and to understand what we are playing. We want to count along and really make sure we get that rhythm down right. Isolate the string skipping part and give that some extra time and you’ll be rocking this one out in no time. 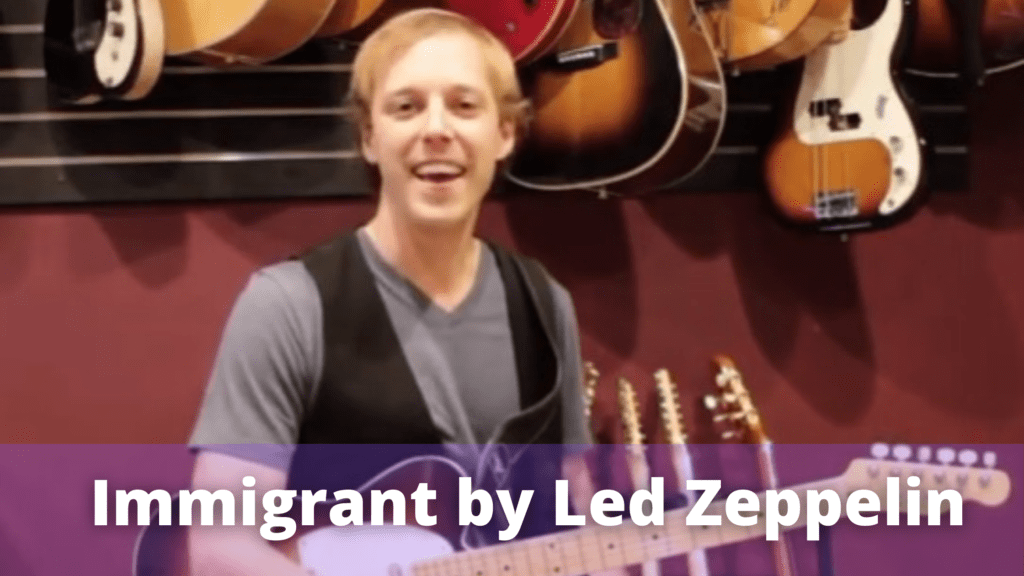 Check out this free lesson from Guitar Control instructor Jon MacLennan on How to Play Immigrant Song by Led Zeppelin. Be sure to get the