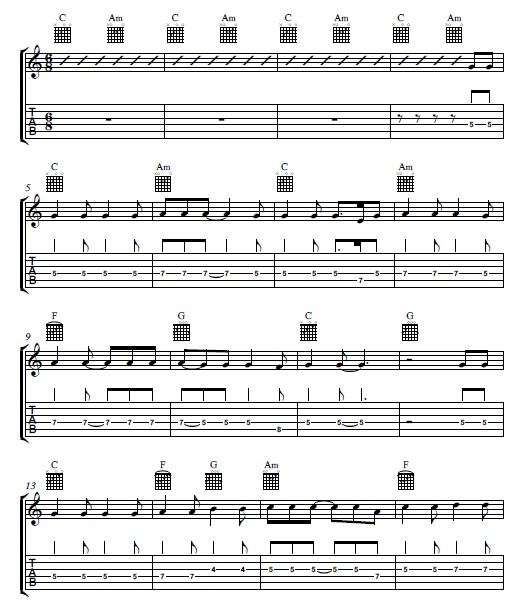 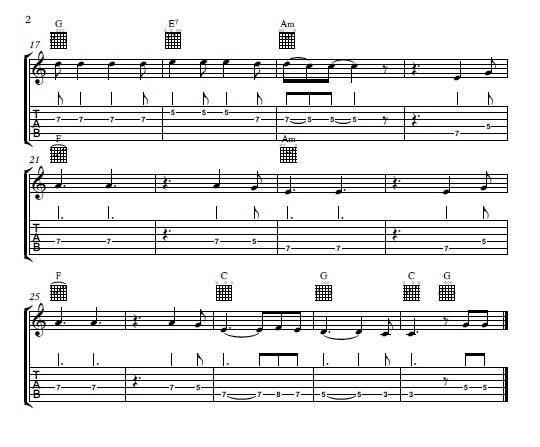 For the verse of Hallelujah I’m utilizing basically in arpeggiating technique playing eighth notes through the chords. So let me go over the chords first for the beginning of the verse when he comes in when I know there was a scene in the corn we’re on a C and then we alternate between C, A minor, C, A minor; so here’s how I play my C and here’s A minor, C, A minor then the next four bars goes F, G, C, G and I use the F with my thumb here like this. So basically I’m going 1 1 2 3 and I put my thumb on the first fret you can borrow it like this if you want or you can do it this way either C and then the G I’m just using 2 fingers, really my third finger and then my pinky.

Okay so I’m gonna take those chords for How To Play Hallelujah On Guitar and then I’m gonna arpeggiate through them, meaning instead of strumming them like this, which you can do this is one way of playing it one probably an easier way is this way, but what I kind of like doing is going 1 2 3 and kind of just breaking up the notes of the chord so what my right hand is doing is starting at the fifth string and going down three strings like this and then I’m moving to the first string and I’m coming up three strings cuz I’ve got I’m thinking six beats in a measure, so one two three. Okay so if I apply that pattern but move it through the first couple chords I’m going to get this. Okay let’s try together a one-two-three four-five-six, so this is just kind of a simple approach to picking it’s a guideline pattern you know so my main goal is that I always want to hit the root on the first note, so it doesn’t mean that you can’t do other patterns you know and I sometimes will mix it up but that should give you a basic place to start. Then for the next four bars I’m gonna go half because of the chord shape now my first note is here F on the first fret with my thumb. So I’m gonna hit that note skip a string play the other two and then come back so. I’ve basically kept the same except for the pattern the same except for I’ve moved the bass note C and I do the same thing for G. So I’m just kind of you know moving with the pattern and depending upon what chord I’m playing all the just so let’s put those first eight bars together here we go.

Moving on, the next four bars of How To Play Hallelujah On Guitar are C for one measure 1 2 3 4 5 6 F G and now this is the only time in the song I guess, except for the last measure, that you have two chords in one measure, so I split it. I go F and do the first 3 notes of F and then the first 3 notes of G and the A minor after that and F so one to snap F. Okay let’s try though that those four bars together oh one two three four five six and the last four bars of the verse go A minor four to one strong then we’ve got that pickup for the melody of the chorus. Okay so let’s see if we could put all that together. I’ve tracked in just this quick melody going here’s our singer C chord and I’m gonna try and play that along with this. Here we go, one two three four five six, pretty cool. So that would be what it would be like if you had a singer singing this tune or you had another guitar player or another instrument playing the melody for you, so let’s try it again one more time for practice.

All right well thanks so much for watching How To Play Hallelujah On Guitar and I hope this lesson inspires you to keep playing and practicing guitar. For more information you can click on the annotation on your screen or the iCard if you’re on mobile and you can check out some of the courses available at guitar control.com. All right well I’m Jon MacLennan, thanks so much for watching and I’ll see you in the next video lesson.

Play From The Heart Course – GO!!!

Learn How To Play Phantom Rider By Tora Tora

Here are some Useful Guitar Tabs we recommend for beginners

How To Play Purple Rain By Prince