How to Play American Woman on Guitar

In this Guitar Control video lesson, Instructor, John Mclennan is going to show you how to play American Woman on guitar by the Guess Who. This song has a really great rhythm part and a great lead part that goes on top of it as well and in this lesson, John is going to show you both of them!

Step 1: Breaking Down The Rhythm

Step one in learning how to play American Woman on guitar is breaking down that rhythm guitar part. For this first rhythmic figure, what John is doing, is he is just moving around a bunch of power chords. You will see power chords played in a lot of rock songs, it’s just moving around this shape that is just a root and a 5th. Power chords and not major or minor since they do not contain a 3rd. John is playing his power chord with his pointer holding down the root note his pinky holding down the 5th, you can use either your pinky or your ring finger to grab that 5th, it’s totally up to you and totally personal preference. Since John is playing them with his pinky, I will say pinky in this lesson, but I personally would use my third finger, so again, there is no right or wrong about this and it is just personal preference. The first power chord is a B5, to play this put your pointer finger down on the 7th fret 6th string, then put your third or pinky finger down on the 5th string 9th fret. So this chord is just those two strings, the 6th and 5th, John archs his pointer finger to lightly touch all the other strings so that he is dampening them and muting them so that they do not ring out unwantedly while he strums. He is really going to dig in with his strumming hand since he is playing some sixteenth notes and he doesn’t want to have to worry about bumping strings he shouldn’t and have them ringing out, so muting the unwanted strings guarantees that you won’t hear then when you strum. So John just builds that muting into his playing. So we stum our first power chord once, the B5. For the next power chord move down a string now placing your pointer finger down on the 5th string 5th fret and our pinky on the 4th string 7th fret, this is a D5 power chord and we are also only going to strum this chord once only strumming the 5th and 4th string. Then we’re going to move the same shape, same strings up two frets. So now our pointer is on the 7th fret 5th string and our pinky is on the 9th fret 4th string. This is an E5. Strum this chord down up down up down. Just strumming back and forth right there. Another thing you may have noticed is that when I move to playing the power chords on the 5th and 4th strings I use the tip of my pointer to barely touch the 6th string to dampen and mute it so I can still strum freely and not worry about that open 6th string ring out over my chord. After you strum the E5 go back to the D5 and strum it once and then quickly back up to the E5 once. This is a total classic rock thing where you are just going back and forth between a whole step. Go to the 3:29 minute mark to follow along with John while he plays this riff slowly. So our right hand is going down on the first B5, then down on D5, then down up down up down on E5, then down on D5, then up on E5. John is thinking and counting in sixteenth notes while he plays along to this riff. That’s just kind of the motor that’s going on in the back of his mind, that’s the groove, the feel. The next part is just two more E5’s just strumming down up. Then start the riff over starting on the B5. Play along at the 4:50 minute mark. Then the second measure, again that’s the basic idea, going back and forth between these two notes with those two chords as a walk up, the D5 and the E5. Sometimes during the second measure he will just do a rest at beat 3. Follow along at 5:31 to see what it sounds like when you mix both of the endings, alternating between them. It’s kind of nice to do a couple rhythmic variations, a lot of times you’ll just listen to the band and play what you feel. And that is the main riff! If you are enjoying learning this awesome riff be sure to check out our other lesson how to play Refugee by Tom Petty And The Heartbreakers for another awesome rock song.

The next part is this distorted lead that comes in on top of the rhythm part we just learned. To start the lead place your first finger on the 9th fret 3rd string, then pick the 11th fret 3rd string using your ring finger to hold the note down. Then you are going to slide from the 11th fret all to the 13th fret, still on the 3rd string and sliding with your ring finger. The lead starts on beat 4. Then stay on the 3rd string and pick the 13th fret with your pointer, to the 14th fret with your middle and then sliding to the 16th fret also with your middle finger. Use whatever fingers feel the most comfortable to you for these first two lines. The next part has a nice skip in it. Start on the 15th fret 2nd string with your pinky finger. Then you’re going to jump down to the 14th fret on the 3rd string using your middle finger. Then play the string in between because you skipped a string.The slide from the 12th fret into the 13th fret with your pointer finger on the 3rd string. All of those are sixteenth notes on beat 4. Then you are going to play some sixteenth notes again. Starting with the 16th fret 1st string with your ring finger, then go to the 16th fret 3rd string with your middle finger, and then grabbing that string in between sliding from the 14th fret to the 15th fret on the 2nd string. The last two licks back to back are kind of like a sequence. Play the whole rif along with John slowly at the 9:15 minute mark. When John is sitting on a note he is adding a little vibrato, just by shaking the note back and forth a little bit and it just gives the note some life.

Recap: How to Play American Woman On Guitar

I hope you enjoyed learning how to play American Woman on guitar! What a fun song! There are definitely cool techniques to take away from this lesson, both rhythmically and in the lead. Remember any time you notice something that’s a little special that a guitar player adds to the playing feel free to add it to yours, or even better take it a step further and make it your own, or let it spark your creativity. And of course, as always, have fun! 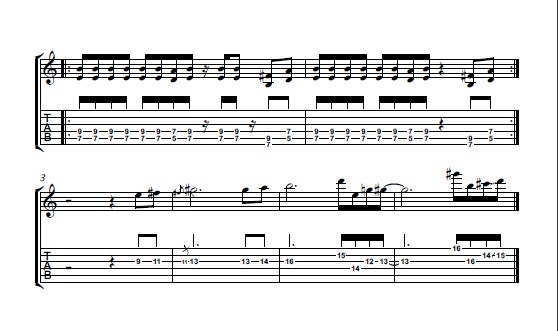