How To Play Rock Lobster On Guitar

In this Guitar Control Rock Lobster Guitar tutorial, Instructor Robert Baker, breaks down the techniques and main riffs in this classic new wave B52’s song. Robert describes this riff as awesome and one of those riffs that makes you laugh. It’s very fun to play and uses a clean style guitar tone with a little grit, but not too much. You may have even heard it on Family Guy when Peter Griffin does a spoof on it! Robert is going to show us a bunch of the main riffs, he isn’t going to cover every single detail of the song, but he will cover all of the main riffs used. The actual song is tuned to Drop C but Robert is going to demonstrate it in this video in Drop D. To tune to Drop D the only thing you do is drop the low e, the 6th string, down one whole step to a D note. To tune to Drop C it would be the same idea, except your entire guitar would be dropped down a whole step and tuned to D and then you would also drop the 6th string an additional step, making it a C. So every string would be dropped down one step, and the 6th string would be dropped down two.

Step 2: The Chorus and Bridge

The next riff is super simple. You are going to pick the open 6th string for one measure full of eighth notes. So picking down and up a total of 8 times. Down up down up down up down up, counting one and two and three and four and. Then go to the 6th string 3rd fret and do the same thing, alternating between down and up picks all eighth notes for one measure. Then same thing on the 5th string 1st fret, and then same thing on the open A, the 5th string. This part serves kind of like a chorus. Then repeat it all again! Then you’re going to do the same movements but the rhythm changes slightly. It goes from 8 picks, which is 4 full beats, to 4 picks, which is 2 full beats. So down up down up change. Then it changes even faster to only 2 picks on each note, still the same movement and order of notes, but now just down up change, so one full beat on each note. This takes us back to the intro/main riff! If you are enjoying learning this catchy riff make sure to check out our video how to play No Quarter on guitar, for another!

Step 4: The Final Two Riffs For This Lesson

The final riff! This song gets a little repetitive so this is going to be the last riff Robert covers for Rock Lobster! So we are using the same drop d power chords, barring the 6th and 5th strings starting on the 5th fret strumming down down down down up, then going to the 3rd fret on the 6th string barring both the 6th and 5th strings and strumming up down up down up down up. The stum on the 3rd fret is pretty much a straight eighth note strum but they left out the very first down on beat one, starting with straight eighth notes coming in on the and of beat two.

Recap: How To Play Rock Lobster On Guitar

I hope you enjoyed Roberts lesson on how to play Rock Lobster on guitar! This song is great for beginners because it isn’t too difficult and they use a lot of the same notes with slight variations throughout the different riffs. So be sure to pay attention when Robert explains the slight variations since most of the parts will sound fairly similar and of course as always, have fun! 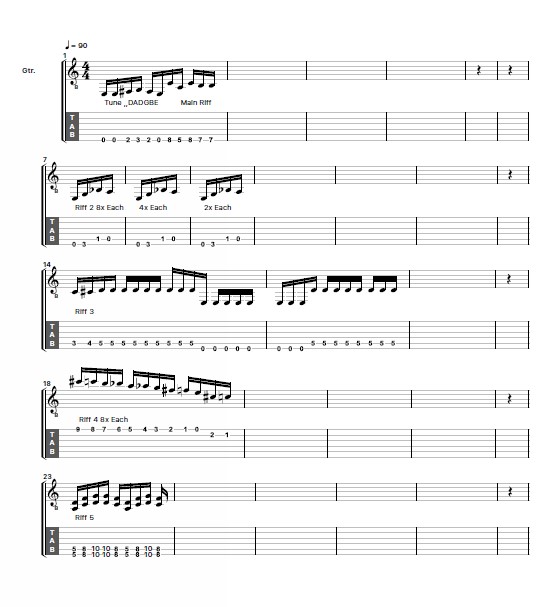