Hey, how’s it going this is Darren Goodman with Guitar Control, bringing you this video lesson today I want to show you how to play the remake of “Bad Romance” originally by Lady Gaga as Hailstorms version of it, it’s more of a heavier rockin’ version of the song. 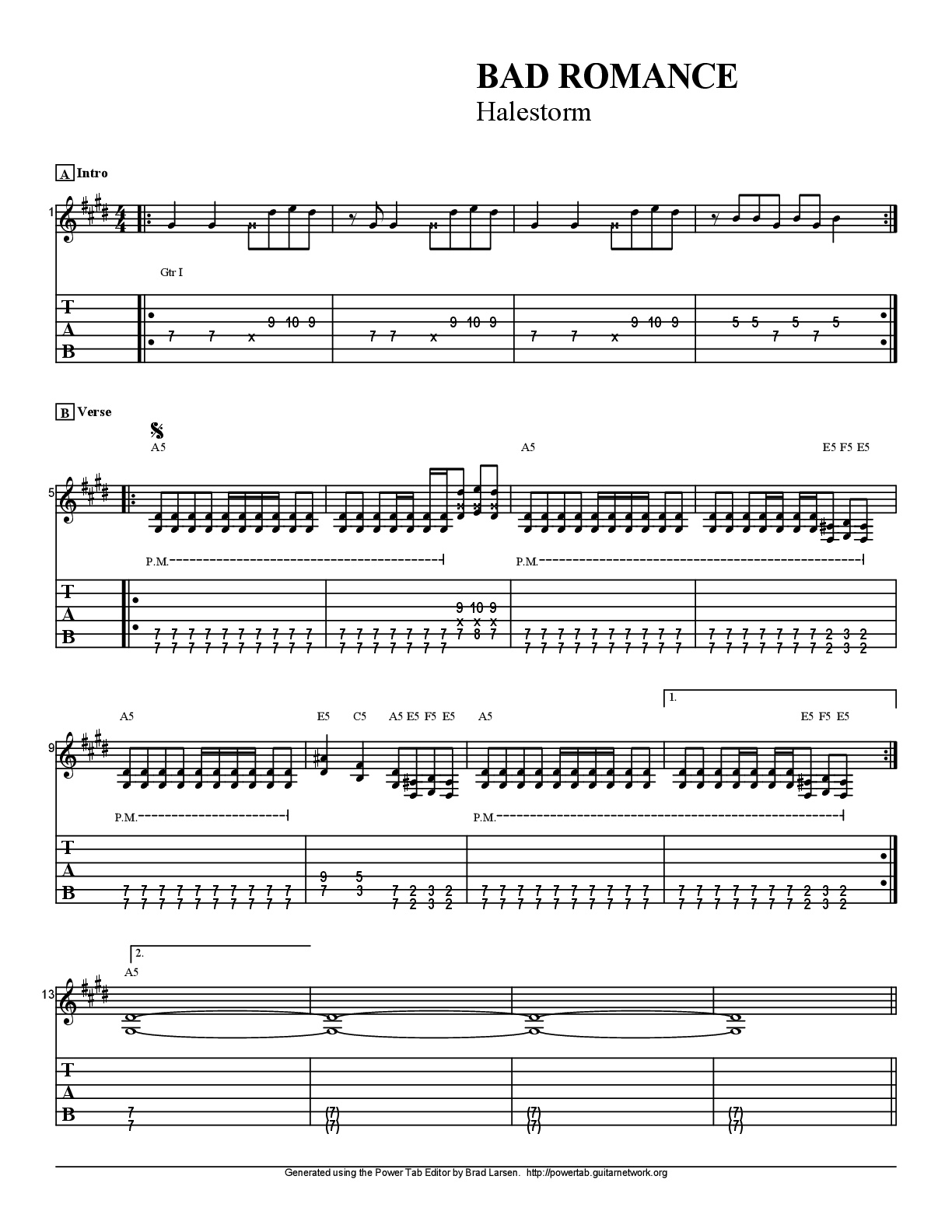 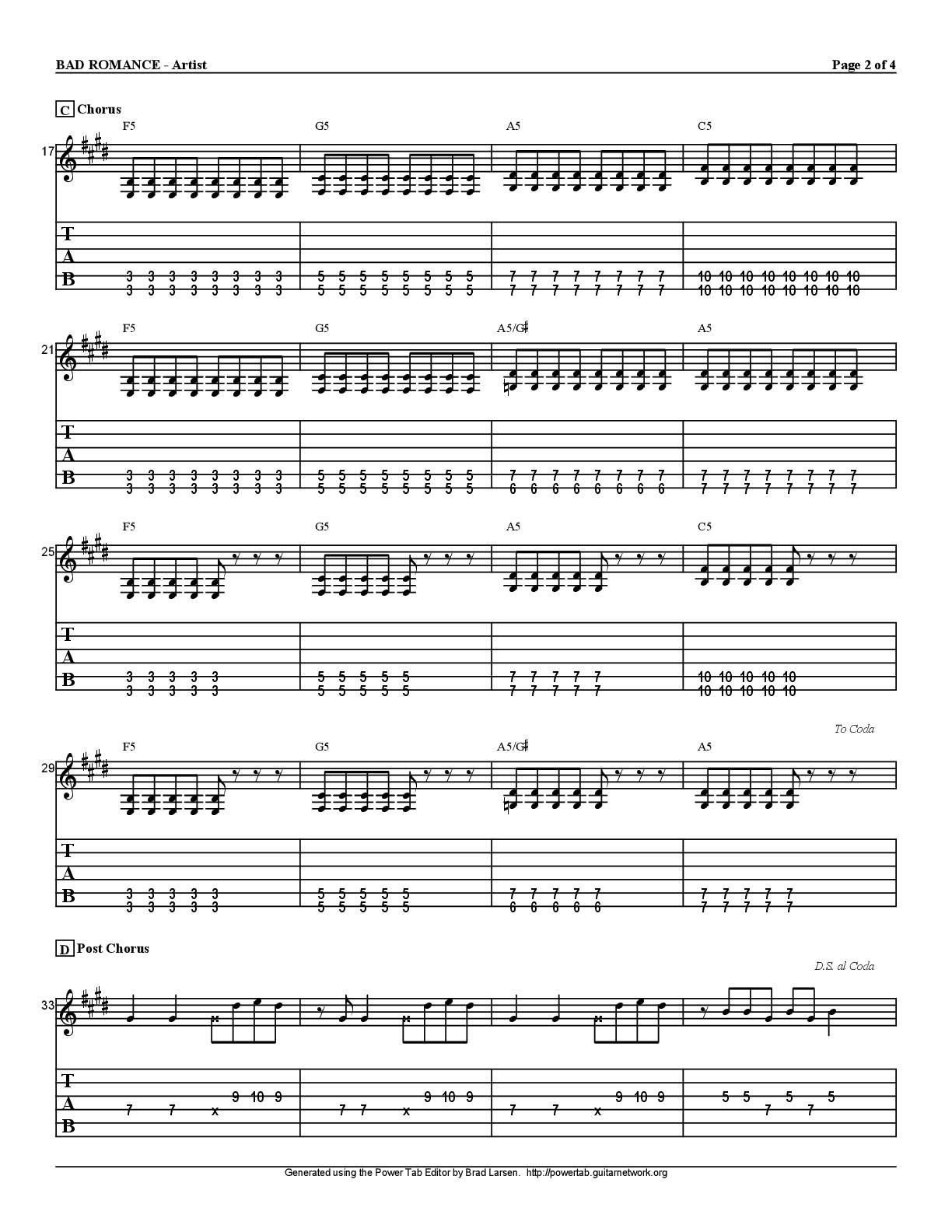 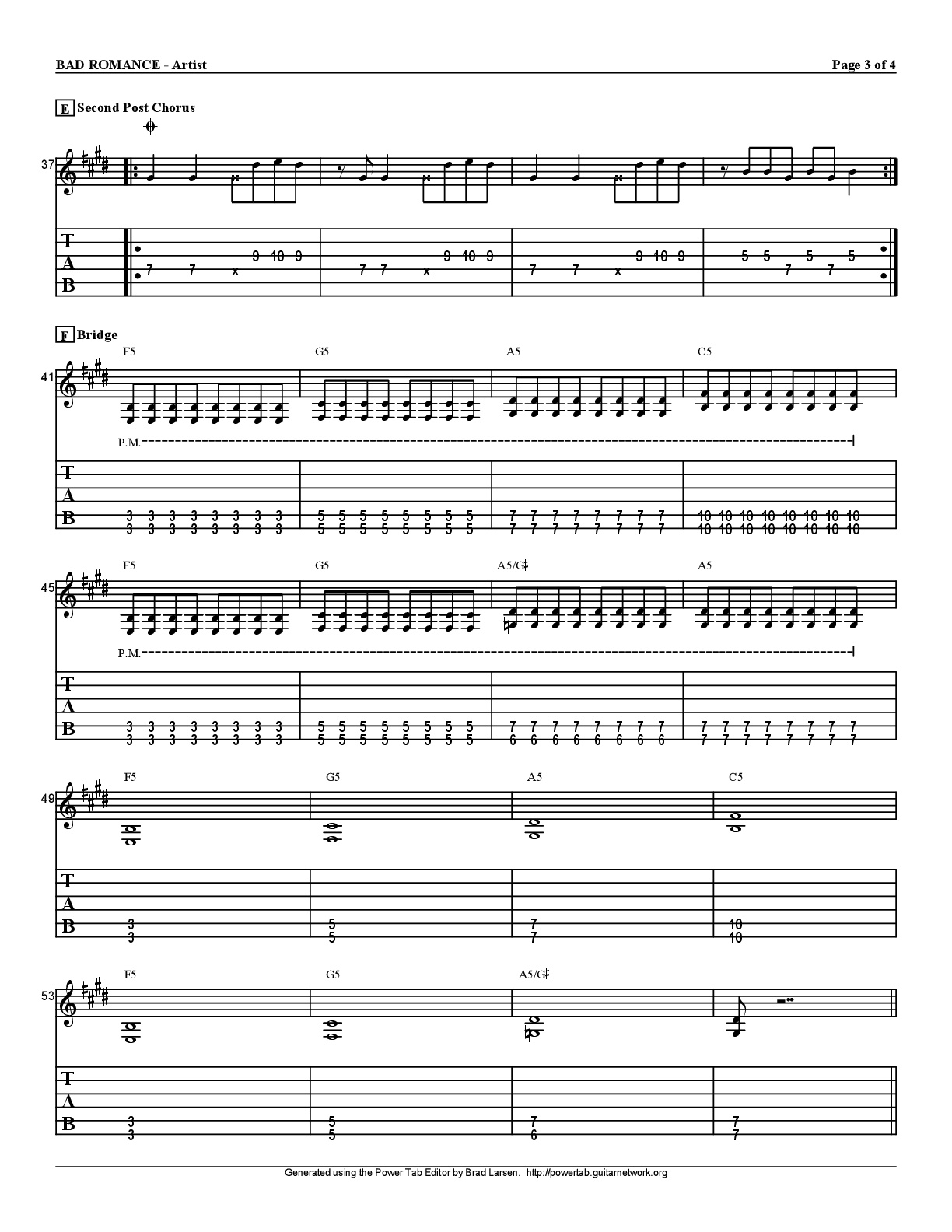 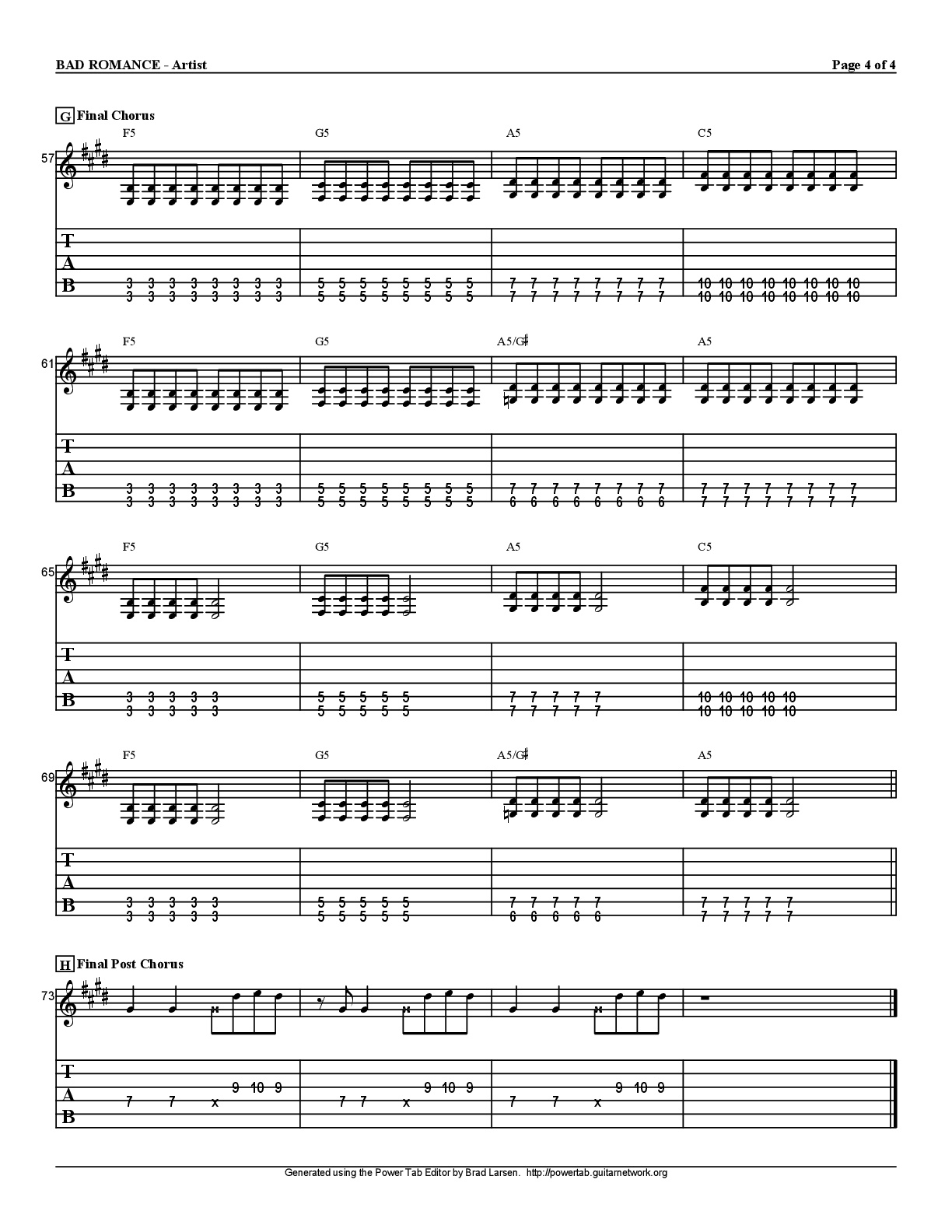 For this song we are in drop D tuning, so what that means is we’re going to tune the sixth string from an E down to a D. The reason for doing this is when you put in between the 5th and the 6th strings you could play those power chords. The song starts out with this little Intro lick that’s actually done with a wah pedal, I’m not going to dig my wah pedal out for this video, so if you listen to the song you can hear what I’m talking about.

Now we move down to the 5th fret of the 3rd string 7th fret of the 4th string to the 3rd string so that whole sequences go like this. Then from there we move on into the verse, most of this is really easy to play it’s just a matter of timing. We’re going to start off, we’re going to bar across the 6th and the 5th string at the 7th fret just our first finger so we can play just those two strings and we’re palm muting.

That’s the first measure and then it go into the end of the next measure which is actually major 6, two more 8 notes or 3 more 8th notes and then four 16th notes. It’s like we’re going to do this little octaves thing, so we’re going to take your first finger and move it, you’re not on the 6th string or you’re on the 5th and you want to play that note but kind of let your finger arcs so that way the 4th string is muted, and then you’re going to pick up the 9th fret with your 3rd finger of the 3rd string and then you strum the 5th, 4th, and 3rd, together between and we’re going to hit that and move up a half step and then back down, so that’s the whole part.

The first four measures of that of that section then on to major nine same thing again except we pick up on measure 10, E5, so we’re at the same finger and the 9th fret of the 4th string third finger and this is a quarter note so 3rd fret, two and back and power cord and we bar on the seven and then two, three, two. Then back to the seven again, now that takes us to the end of the repeat

This has a first ending, a second ending, so the first time you play through the verse starting at the fifth measure you play like exactly what we just did and then it repeats the second time through. If you look at that very last measure that would be measure 12, you can see that there’s a repeat at that at the top of that a bracket with the number one meaning that’s the first ending that’s what you play the first time but in the second time you’re going to skip that major and go right down to the third major and you can see the bracket with the number two that’s your second ending just simply hit that chord, you’re going to let it ring out for a total of 16 beats, so the whole verse from there we go to the chorus and to the chord it’s fairly simple we go to the third fret across the 6th and the 5th string and we have a whole major there and then a whole major at the 5th fret and then the 7th fret and then the 10th fret.

It is all done with just 8th notes, now when we go to the 3rd major of this section that would be the twenty-third major it’s a five over G sharp so you’re going to go from five up to six but you’re also going to take your second finger in fret of the fifth string, it sounds good in the context of the song but it’s not a chord you know probably just playing a lot by itself it’s kind of weird sounding.

So that whole section or the whole chorus rep leaves us to major 25 and we go back to the 3rd fret and we one, and two, and three, and then we rest on the end of three and four. Back down to the 3rd fret now, you do that one where you go six and then you pick up the 7th fret 5 over G sharp and the 7th and remembering a little post chorus section and it does that little opening riff again.

From there you can see at the end that says DSL Kota so this is musical direction, I don’t know if you you understand how this works so I’m not going to get too heavily involved in it right now but it’s simply “Del Sigma L Coda” means that you’re going to go back to the sigma sign before you go to the coda sign.

The Sigma is the symbol that kind of looks like an S with a like a fancy s with a slash through it and so if you go all the way back to the verse you’ll see that little symbol so at measure five right above where it says a five the chord you can see that a little symbol so that you’re going to play through all of that again everything like we did the chorus everything all the way up to the end of the chorus and then it – there it says – Kota means we’re going to skip that post chorus part, that we just did and we’re going to jump all the way to major 37 because the code symbol is right there and it kind of looks like a circle with a cross in it. I always tell to my students if you’re looking down the sights like on a video game it’s like the crosshairs. There it goes – this is actually the second post chorus so it’s that same little riff again and that has a repeat so you do that entire sequence twice which is basically with the difference between the first post course in the second post course.

We start off on the 3rd fret and this time no palm muting. Staggered corded 6th, and 7th fret now before we go back to the 3rd fret, we’ve got our four 8th notes and a half note. So ten final post-chorus same riff again and then the very last major is just a rest because they sing Acapella.

Well I hope you got something out of that and enjoyed that guitar lesson. Make sure to subscribe on our YouTube Channel and we’ll see you in our next video lessons, thanks for watching.