How to Play School’s Out For Summer

In this Guitar Control lesson video Robert Baker, is going to explain how to play “School’s Out for Summer” by Alice Cooper. This riff is super cool, and recognizable. It will get everyone wanting to sing along! Robert will go over the main riff and solo, and explain the different techniques used to make both this riff and solo stand out as a legendary song. If you need more experience to nail this, please refer to our guide for learning how to play basic guitar chords. 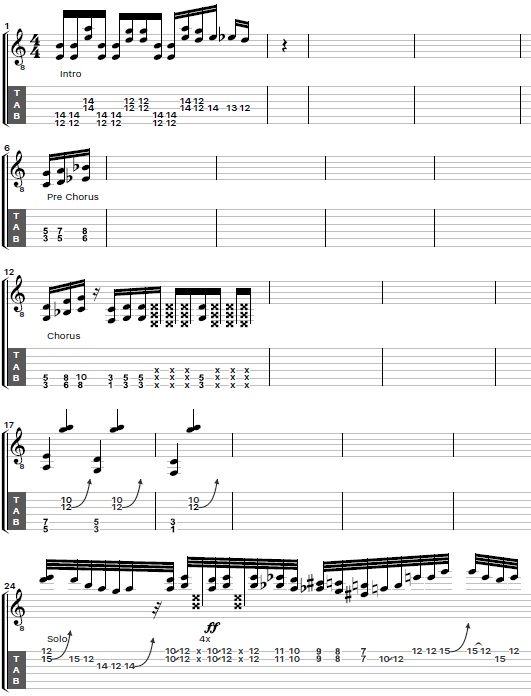 To start off this part, and the entire song, Robert goes to the 6th string to play an E power chord. He actually plays this chord in a higher voicing than you’d expect, starting at the 12th fret 6th string with his pointer and using his ring finger to hold down the 5th of the chord on the 14th fret 5th string. He plays this E5 power chord twice. Then rolls his ring finger down to the 4th and 3rd strings, barring them with his ring finger to pick them at the same time. Then he goes back to the 6th string E5 power chord on the 12th and 14th frets on the 6th and 5th strings and plays it twice, just like he did the first time.

Now, following it with his ring finger holding down the 12th fret on both the 4th and 3rd strings. Robert explains there are other ways to play this and shows a few in the video at 1:28. But recommends this way, since that power chord really thickens up the riff. Then we almost repeat this all.

If you listen closely you can hear it’s a pull off. Then he repeats all of this, and this is the whole beginning part. When the singing starts the riff remains the same, except that he removes the chromatic lick, where he pulls off the 14th, 13th, and 12th frets on the 4th string. If you are enjoying this Alice Cooper classic be sure to check out our other video on how to play No More Mr. Nice Guy, also by Alice Cooper.

Next he starts with a C5, which is played with the pointer on the 6th string 3rd fret and the ring finger on the 5th string 5th fret. This pre-chorus has a nice driving rhythm that leads us to the chorus where he actually sings “School’s Out”. And you can’t learn how to play “School’s Out for Summer” without knowing that. He is playing an eighth note rhythm, and alternate picking, staying on C5 for a measure and a half, so 6 beats. Before moving to the 5th fret 5th string for two eighth notes. So strum a down and an up. To the 6th fret 5th string also strumming it for two eighth notes, a down and an up. Sitting on the 6th fret power chord for one complete measure of our strict eighth note rhythm

Then he scratches the guitar strings while muting them, down, up, down, and up. Then we play the G5 power chord on the 3rd fret 6th string down, up, down, up, down, down, and down. This is all followed by a walk down with chords. First an A Major bar chord on the 6th string, to a G Major 6th string, to an F# Major. So our roots go from the 5th fret 6th string to the 3rd fret 6th string, 1st fret 6th string. In between each of these chords is he plays the same unison bend. This is done by picking the 15th fret 2nd string, so that string is our bend, and then you also strum the 1st string with your pointer finger holding down the 12th fret 1st string. The are played together. So this happens between each chord in the walk down and hung out for a little extra time after the F# Major chord. Then the guitar fades out and comes back in from the solo.

Recap: How To Play School’s Out For Summer

I hope you enjoyed Robert’s lesson explaining and demonstrating how to play “School’s Out For Summer”. This song isn’t too difficult and is really fun to play. The Solo has a couple challenging parts that will push you a bit, but that’s a good thing! Remember to slow things down before you speed them up, pay attention to the scale shapes Robert demonstrates.