How to Play The Intro to Voodoo Child By Jimi Hendrix

This is one of my all time favorite Hendrix songs. In my Guitar Control video lesson we’re going to learn how to play “Voodoo Child Intro”. I still remember my first learning on this song when I started to get into more guitar hero songs, and how bad I wanted to learn all the cool feel and stylistic things Hendrix does to stand out as a guitar hero. This song is a great start into learning how to make your guitar sing and how to find your own voice on the guitar. And who better to learn how to make a guitar sing than from Jimi Hendrix! Also this song is in Eb tuning so if you want to play along with me, make sure to tune your guitar down a half step. There are more detailed directions in the video above. 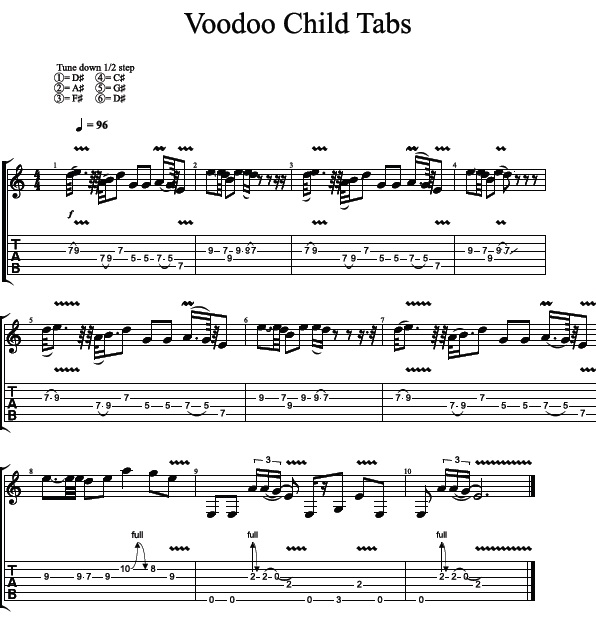 Step 1: Breaking Down The First Half of The Intro

I like to think of this intro riff as 4 different parts, since they are all variations of one another. Only the first and third time are identical and the second and fourth time have variations. Seeing patterns and/or similarities when learning is very helpful to learning things quickly and key in remembering them.

So for our first (which will also be our third part) in learning how to play the Voodoo Child Intro, we hammer-on with our pointer on the 7th fret, 3rd string, to the 9th fret 3rd string. A hammer-on is when we plant one finger, pick that note, and then slap our other finger down to create the sound for the next note instead of picking. This technique is really cool and has a different sound than picking twice. It creates a smoother sound, often referred to as legato. After we hammer-on the 3rd string, we do the same frets but now we hammer on on the 4th string, then back to the 3rd string, 7th fret to pick it once.

Then we go to the 5th fret, 4th string, coming out of that box shape and pick it twice and then hammer-on to the 7th fret, 4th string.I bend down a little for style and then pull off back to the 5th fret, and go straight to the 5th string 5th fret and vibrato our ending phrase note. If you are enjoying learning this awesome Hendrix track make sure to also check out our lesson on how to play Purple Haze also by Jimi Hendrix.

Our second ending is much simpler. We have the same vibe and feel, but this one has more attitude and space. For this ending we just pull off and bend the 9th fret 3rd string to the 7th. For this one we aren’t exactly bending to a specific pitch, it’s more more stylistic. See the video above to hear and imitate it.

Ending three is the same as one, so now for our final ending. So ending four is still really similar but slightly different. We start with a hammer with vibrato on the 3rd string 9th fret and pull off to the 7th fret same string, then we move our third finger to the 4th string 9th fret, then straight back to the 3rd string 7th fret. Straight into our bend on the 10th fret 2nd string, where we pick to bend and pick when it’s in the air at the whole step, then bring it down. Then we pick the 8th fret 2nd string and end on the 9th fret 3rd string with lots of vibrato.

Recap: How To Play The Intro To Voodoo Child By Jimi Hendrix

I hope you had a lot of fun learning how to play the Intro to Voodoo Child! This riff is challenging but also shows you how just a few simple ending changes go a long way in adding style and feel to our writing and playing. And what better teacher than Jimi Hendrix! Remember lots of feel and vibrato and make the guitar sing.