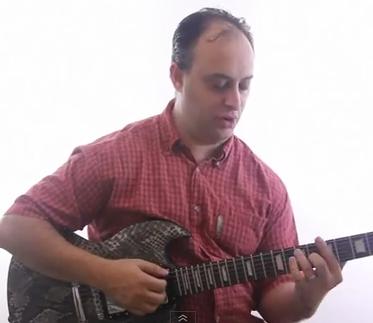 Hey friends! Here´s a cool lesson about spicing up your blues guitar chords from Guitar Control instructor and founder Claude Johnson. In this free lesson Claude is going to show you how to Spice Up Your Blues Guitar Chords.

Hey guys. Claude Johnson here and I want to do another video on blues guitar chords. So you’re probably familiar with some of these chords. So for example in the key of A we’re using A7. Now on the four chord, which is the D, instead of going to D7, we could go to D9 and I showed this in another video, but we’re going to do a little bit deeper here; so I’ve got my middle finger on the 5th fret of the A string, which is a D, first finger on the 5th fret of the D string, ring finger on the 5th fret of the G string and then pinky on the 5th fret of the B string. You can check the link in the video description to get the tabs for this. But this is like a little bit more sophisticated sound than just your ordinary D7. So let me just play it so you can hear the difference; A7… D7… it sounds good, but let’s just throw in the D9 instead… sounds a little bit different, little bit cooler right? You can also throw them both in. Okay now if we flatten out our pinky, that’s still a D9, we’re just getting the fifth degree one octave higher; however if I take my pinkie and put it up… that becomes a 13th chord, so that’s another way to add a little bit more color to that and you can you can go back and forth between that 13th and that I guess. Technically they at 12, but people you know will never say that it’s a 12th, but 13th, it’s basically going from six to five. So if you do not understand that let me just break that down real quick. So in the major scale there’s seven notes… so if you’re in the key of A and you go up 1 2 3 4 5 6 7, your eighth note is back on your octave, so when we say 13th we really mean to start here 8 9 10 11 12 13. Okay same thing with the D; so 1 2 3 4 5 6 7 8 9 10 11 12 13, but it’s really the sixth up an octave. Okay and just as what we’re doing like the blues shuffle… there’s your fifth to sixth… so all that shuffle is doing is; 5 6 5 6… and you can do that same move… okay so you go five to six and then you can go back into your chord. Okay so here’s another blues guitar chord that I want to show you, still in the key of A, let’s go to our fifth degree, which is our E, so instead of the E9, let’s just raise our pinky up one note and we have what’s called sharp nine (#9). Okay very spicy sounding chord, I’d like to call this the Jimi Hendrix chord and I’m not the first person to say that… because that’s the chord used in songs like Purple Haze, Foxy Lady and other songs. So it’s a good chord to go to on the 5th chord and what’s really cool about it is that raised ninth is also a minor third. So we’re on an E right, it’s a minor third interval which is very bluesy, but you also got your major third down here… so you have a minor third and a major third in the same chord which is really characteristic of the Blues itself which kind of makes this chord kind of special. So what you can do is do this and then down your regular nine, you can also do just move old shape down. I’ll show you one more chord in this video… it’s an augmented chord. I’m going seventh fret on the A string, 6th fret D string and then barring the fifth fret. So I get my third augmented, which is the sharp… so in context… Alright so hopefully that gave you some ideas for some new killer blues guitar chords you can throw into your blues playing and spice up your blues chords rhythms. Alrighty catch you next time and don’t forget to check out my blues course at guitarcontrol.com/blues, lots of great stuff including 245 tagged examples. Catch you next time.