Check out this Easy Def Leppard Hysteria Beginner Guitar Lesson from Guitar Control instructor Silvio Gazquez. Be sure to click the link for the tabs so you can easily follow along with this killer free guitar lesson. 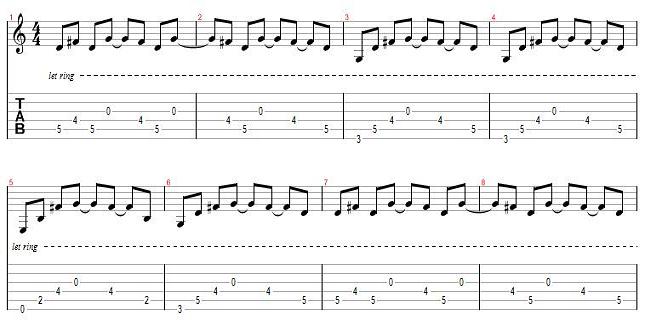 Def Leppard is an English rock band formed in 1977 in Sheffield England. They are of the bands from the early 80s movement “New Wave of British Heavy Metal” along with Motorhead, Saxon and Iron Maiden.

They released their first album, On Through The Night, in 1980 which reached the top 15 in the UK, but they didn’t get global traction until the release of their second album, High ‘n’ Dry. “High ‘N’ Dry was produced by Mutt Lang and the single from the album “Bringin’ On The Heartbreak” was one of the first videos on MTV in 1982. In 1983 the band released their most successful album to date with “Pyromania”. The two singles “Photograph” and “Rock Of Ages” both topped the charts and helped to certify the album “Diamond”.

In 1987 the band released their most successful album of their career with “Hysteria”. Hysteria has sold over 25 million copies world wide and is one of the best selling albums of all time. The album had numerous singles including; Animal, Love Bites, Hysteria, Armageddon It and Pour Some Sugar On Me. Def Leppard is one of the best selling bands of all time having sold over 100 million albums world wide and two albums, Hysteria and Pyromania, being RIAA Diamond Certified. They are one of only five bands with two studio albums selling more than 10 million copies in the US. Def Leppard was inducted into the Rock and Roll Hall of Fame in 2019. The band still tours and plays to sold out arenas world wide.