here´s another cool chord progression in the style of Green Day! 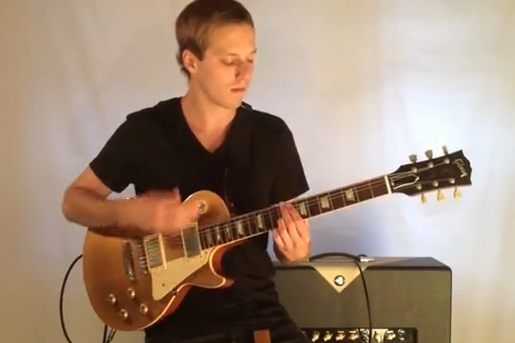 Hey, how’s it going everybody.
My name is John McClennan and I’m here
with guitarcontrol.com. In today’s lesson
what we’re going to look at is a type of
style of rhythm playing used by the band
Green Day. One of their typical chordal
structures that they use a lot is a power
chord. That kind of sound, which, again,
is a staple in rock and roll music.

But what I want to look at today is this
wide spread interval chord that begins here.
We’re going to start on an F minor and we’re
going to have the 8th fret and the 9th fret.
And what you have to do is you have to just
play those two strings and you have to learn
to mute every other string.

My first finger comes up and I mute the 6th
string just by lightly coming into contact
with the string. Then I play the note on
the 5th string, then it lays flat and it
mutes the next two strings. See, these are
muted. And then I play with my 3rd finger the
9th fret, then again, this part of my finger
is muting the high string. So my general rule
is if I’m not fretting it, I’m muting it.
You have to learn to mute those strings,
especially if you’re going to play this kind
of thing where it’s more about just the rock
feeling of it. So you can’t be like, oh no,
I hope I don’t hit that string, because if I
bump it, it’s going to ring open. You have to
be able to mute everything. So that’s going
to be part of your practice in this lesson.

We’re going to start on this chord. And this
is a substitute for a minor barre chord.
Here’s the full chord. As you can see it’s
just taking sort of the outer notes. It’s
like a shell chord of this bigger structure.

Then I’m going to move that to a D flat chord,
which again, here’s our D flat barre chord.
But now we’re just going to take the outside
two notes, 4th fret, 6th fret. We have this
awesome, open spread sound where sometimes
with lots of distortion on, when you play a
larger chord or depending upon the voicings,
the notes just kind of get mushy and blend
together. But this has such a strong sound
to it and it’s just two notes. And then we’re
going to slide that up to the 11th fret and
then the 6th and 8th fret.

So all those chords together are… Start over.
So a song for reference, this is “Holiday”
by Green Day. This lesson is just basically
on these types of chords, which can be a
great device for you to use in your rock playing.

All right, I hope you enjoyed that and be
sure to click the link below for the tab
and we’ll see you in the next video lesson.

Guitar Songs With Chords That Are Easy To Learn