How To Play A Reggae Rhythm on Acoustic Guitar

Hey,
Check out the latest video from Jimmy Dillon…
Yes, I can’t believe he’s coming out with ANOTHER amazing course.
This one is called Modern Acoustic Guitar. Post your comment!

Our first lesson today is in the key of G. A lot of
people have contacted me through the years about
Jawaiian music and reggae and acoustic reggae and I
think guys like Jack Johnson, Jason Mraz, ALO,
there’s a lot of great modern — we talk about
modern acoustic guitar. I wanted to get into the
island feel right away, because it’s just one of
my favorites. I’m going to show you what I’m going
to be playing in the first lesson. It’s just a I
IV G-C and it goes like this.

Now, as you can see, and you’ll probably notice
I do a lot of this. I call them partials. I’m not
playing a whole G chord here. I’m playing just
the bottom four strings in the G chord, which
you’ll hear often in reggae music and this
kind of modern Jawaiian music, they call it,
the tropical flavor.

Basically when you’re in the key of G, that’s
your part, then you go to the IV chord, C, and
then down to G. So for this first exercise we’re
just going to go I IV; I IV, back and forth.
What I’m going to do is I’m going to show you
in real time, with the track — I’ve got a little
loop for you — and it’s got — you’ll probably
recognize the feel. It’s got kind of a reggae
feel, a little bit of Jawaiian on it, which I
really like. I think that’s a cool sound.

So now I’m going to play it for you with the track
and you’re going to see what it sounds like, what
I just showed you right there. Hopefully you got
that, the I and the IV chord back and forth. It’s
a very simple thing but it’s real effective and
it only happens on acoustic guitar in this
particular way. So here we go with the track.
We’re going to run the track right now and I’m
going to play along with you. Here we go.

I can simplify it just by hitting one. That works, too.
That’s really simple. All upstrokes. Okay? G, C, it’s
that easy. Just get into the groove.

Now what I’m going to do is I’m going to take it
apart and show you what I did and then go back
and embellish it a little bit. There are things
we can do on top of that that are very simple
and also kind of a call and response.

Obviously we’re doing a I IV. That’s the most simple
way to do it. I’m doing upstrokes. You’ll notice I’m
doing it right now with my fingers. I like the sound
of rhythm done with the fingers. I can also show you
how it sounds with a pick. Now, it’s going to sound a
little bit different, but for those of you that don’t
do finger style, that’s going to work, too. I’m just
doing an upstroke with my pick. Now you’ll notice I’m
doing the simplest version and I’m letting the bass
and the drums do the rest.

Now, if I want to get a little more… A little
more noise, right? If I was just playing by myself
I might do… That’s a little bit more difficult.
And then if you want to go a little more, I might…
So if you’re sitting in a little cafe on Maui and
you’re trying to contain the troops you might want
to get a little more going. Let me show you exactly
what that is.

That’s a low G, then a B note on your A string
and then a C note on your A string. Now that’s
obviously kind of a Bob Marley kind of thing.
I just want to mention this right away, because
when we talk about Jawaiian, we talk about modern
acoustic guitar, we have to mention the masters.
When you look at Jason Mraz and some of the
proponents of modern sort of reggae/pop/acoustic
music, which is what we’re really dealing with
here. You’ve got to bow to Bob Marley and Peter
Tosh and some of the great reggae players.

When you’re doing this on your own and you want
to make a little bottom going, see that? See that
scratch right there? That is the most broken-down,
simple way I can show this pattern. 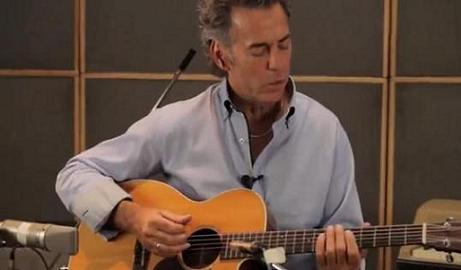