Hey guys!
In this guitar lesson, I will teach you some cool
variations for making a major chord sounds more interesting.
I´m going to add a 6th interval to our major chords!
Hope you like it, and don´t be afraid to try it over your own chord progressions.!!!
Watch the video and please like us and comment on youtube.
Also do me a favor and subscribe to our Youtube channel!
https://youtu.be/AY6L3_PVaHw 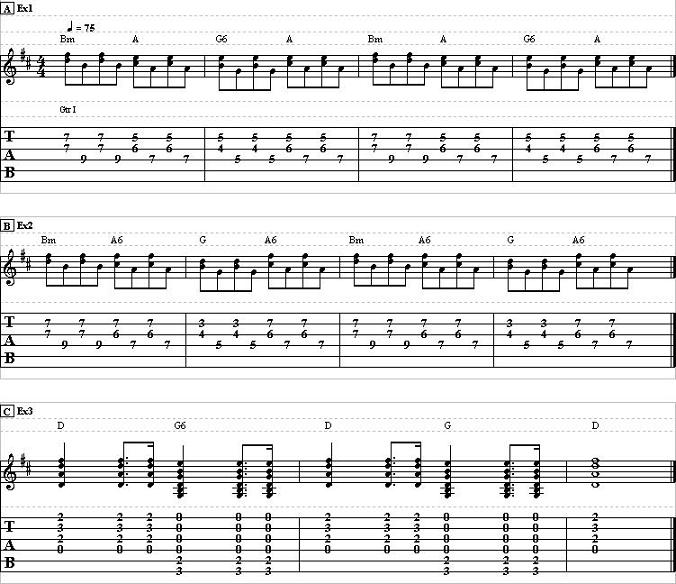 Hey, guys. What’s up? It’s Claude Johnson from guitarcontrol.com
and in today’s lesson I want to talk about the major 6 chord.

The major 6 chord is a variation on your plain old, ordinary
major chord. So you can use it as a substitution to spice-up
maybe like a song you’re playing or a song you’re writing or
maybe you’re just jamming. Technically it’s like a root 3rd,
5th and then 6th, although sometimes you can leave-out
the 5th and just play root, 3rd, 6th.

Let me give you an example. Here’s a progression that I like
to play. It goes B minor, A, G, A. So you can play it like
this. Now what you can do is instead of playing that, you
can play G6 or G major 6. So it will sound like this.

What I’m doing here, all these chords are on the D string,
G string and B string. It’s just triads. The first chord
is a B minor with my ring finger on the 9th fret of the D
string, and then barring the G and B strings with my first
finger on the 7th fret. We go to the A chord and we’ve
got 7th fret, 6th fret, 5th fret with our ring, middle
and 1st finger on the D, G and B strings. G chord, you
just slide that whole shape down. So we have 5th, 4th,
3rd. And then with my other hand, with my picking hand,
I’m using the pick to pick the D string and I’m using
my middle and ring finger to pluck the G and B strings.
The pattern is pluck, pick, pluck, pick. That’s the
basic progression, B minor, A, G, A.

Now, when we get to the G 6 all I’m doing is adding
my pinkie on the 5th fret of the B string. Notice it
has a nice little voice leading effect in this case
because our previous chord, the A, the melody knows
that the high E and the G6, same note. Or, you could
play the A as an A6. So you would have this. And
you can experiment with different voicings.

Now, all these happen to be that other voicing that
I told you about, root, 3rd, 6th. You could play
this one. That’s your full root, 3rd, 5th and 6th.
So it’s like an E major shape. And then your pinkie
on the 5th fret of the B string. So that’s in the
key of B minor. Now if you know what the relative
major means, basically if you’re in the key of B
minor you’re also kind of in the key of D major,
or it’s relative to it. I won’t get into that topic.

Let’s just try playing a D major and then the G6 this way.
We have a nice progression. What I’m doing here is basically
an open G chord, but I’m lifting off. So I’m playing that
high E string. And we know that the E is the 6th of G
because we can just count up the G major scale. There’s
your E. So it sounds especially good on the 4 chord of
whatever key you’re playing in. But really any major
chord you can try experimenting with adding the 6th degree,
major 6th chord instead of the major chord. Hopefully that
gives you some ideas and I hope you got something from that.

Now, if you want to check-out some of my courses, if
you want to learn how to play a lot of songs, check-out
guitarsongcollection.com. That’s my little plug for the
day. Hey, man, keep on rockin’ in the free world.